Now. When I tried Maybelline’s deemed iconic and best-selling Great Lash mascara, I did not like it. When it comes to lashes, I am more of the side that believes in the bigger the better and even when I try to play it subdued, I still like noticeable volume. I found the original Great Lash very underrated, and I haven’t swiped it since.

This year however Maybelline has been curating a new layout similar to Revlon and CoverGirl in that products are rolled out under the name of a popular stable like Bombshell Volume by Lash Blast and Lash Potion by Grow Luscious. Great Lash is currently a mini brand and the line-up I’ve found to be better than the original. Right now, they have Lots of Lashes, Great Lash BIG, Real Impact, Curved, and Doll Mania. I’ve tried Real Impact and Curved. I really like both. The Curved brush is basically the standard but revamped and a curved brush really makes a difference sometimes, like L’Oreal Voluminous. Real Impact reminds me of like a flatter, thinner version of Urban Decay’s Perversion and stayed true to its packaging of giving lashes a real, non-false-y like effect on volume and length. The Curved I would use to layer and Real Impact before if you do plan to use another mascara. 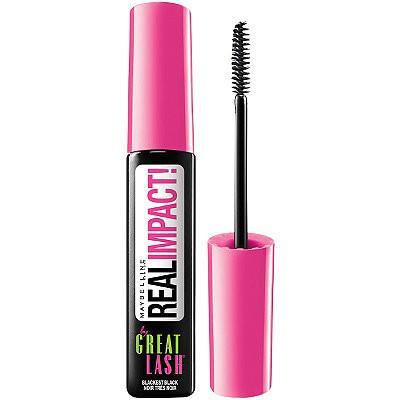 Another Maybelline product I’ve been liking a lot is their Brow Drama. I’ve always been afraid of touching or messing with the eyebrows. I just get my regular waxes and leave them alone. Even using a brow brush was pushing it! I barely pluck and I don’t draw them further on. I did lean most towards brow gels, but still, I never bothered much. Brow Drama however has been great! The brush has a spiral tip that you swipe across slowly. You just follow your natural shape and build on it. The gel is a little tacky-like once it dries, but I’ve been happy with the results. I’ve also started using my PopBeauty Cat Eye liner in Onyx as a brow pencil and then set it with the Brow Drama in Deep Brown. My only complaint is that I do wish there was a genuine black color as I have black brows and while I know makeup artists and gurus suggest your brows be lighter or darker depending on your hair color, Deep Brown is more Mocha. Some of us have black eyebrows! It’s a great beginner’s tool for anyone that’s been afraid to touch up their brows.

ng through a colored eyeliner phase. I was a bit tired of classic black and I still wanted to achieve the cat-eye but with a pop. I feel colored eyeliner used to catch come flak, but lately, the liners that have been coming out have been better than the past and the colors super vibrant. Urban Decay’s 24/7 Glide-On Pencils are probably the most fun and their expansion of colors have every in-between shade and with likely more to come.

The drugstore equivalent is without a doubt L’Oreal Silkissime pencils. These liners do not disappoint and they are jewel toned to a fault. The texture is creamy but stays put and the colors are the real stars. I have them in Colbalt Blue, Green Envy, and Gold. The Green Envy is the hardest to use as it’s more on the sheer side, but is still great because it leaves a subtle shimmery outline. The Cobalt Blue is my favorite. In the past for colored liners I’ve used Maybelline Master Drama Chromatics (very good. I got one in a teal), and Mally Beauty, also in a turquoise shade. The Silkissimes are ones of L’Oreal’s best products.

Speaking of colored liner, when I purchased my Silkissimes I also got Fergie’s Wet n Wild On Edge Longwear Eyeliner in “Violet Femme”. Similar to the former as far as texture, this shade is really subtle, more so than I expected so I use it as a inner corner highlighter, but I like it.I bought this same liner in black and it’s jet black but you’ll have to re-apply. It tends to run.

Another L’Oreal product I finally got was the hue “Everlasting Plum” from their Infalliable Le Rouge lipstick. I’ve had this shade before from other brands so I’m not exactly sure why I was so amped to get it. I think it seemed darker than M.A.C.’s “Rebel” or CoverGirl and Rimmel but it’s nearly a carbon copy. Pretty nonetheless.

Lastly, I’ve been trying to get better at applying false eyelashes which have suddenly become commonplace and not just reserved for theatre or photoshoots (which they’re fantastic for). I think they’re great but I find them so hard to apply. Like to the point I want to toss them across the room hard to apply after my fifth try. A friend of mine is so good at it, even though you know they’re falsies, they look good.

During my hot mess attempt at applying Elite lashes (that looked pretty in the package) with aloe-based clear lash glue), I had some videos from YouTube in the background. Below is one tutorial I had so helpful, and while I flopped, her direction were clear and friendly. TIP: Don’t be cheap like me and get a $1 tweezer. The lashes barely stayed on top of my real ones when trying to place them. They were no grips on the ones I bought. I couldn’t even tweeze with them if I wanted to!