In Defense Of Rita Ora: 6 Performances That Prove She’s Got Talent 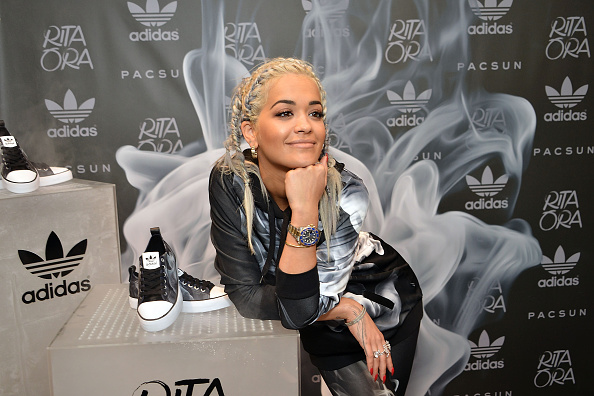 SANTA MONICA, CA – MAY 09: Rita Ora at the PacSun And Rita Ora Celebrate her new adidas Originals Collection With In-Store Signing event at PacSun on May 9, 2015 in Santa Monica, California. (Photo by Araya Diaz/Getty Images for PacSun)

If you’re super into music (and I am mean obsessed), you’ve likely heard of Rita Ora. If you can’t recall the name, you’ve probably seen her as face and body of brands Roberto Cavalli, DKNY, Madonna‘s Material Girl and for her capsule collections with Adidas. You might’ve also picked up the name from the gossip mill as she’s dated Bruno Mars, Rob Kardashian and Calvin Harris.

Yet all those reasons as a claim to fame are frivolous in comparison that at the age of 19 in 2009, Ora was signed to Roc Nation after singing a cappella in front of Jay Z.  Soon however, the road to her being overexposed began. She was quickly casted in huge fashion ads (the first being Calvin Klein). And since 2009 she has scored A-list entry into some of the most awesome fashion and music events and parties in the world, including performing the nominated song “Grateful” at this year’s Academy Awards. When her debut album Ora was released in 2012, it was officially available internationally and just a few singles were allowed on American Spotify and iTunes. Four years later, people are still making “Who is Rita Ora” jokes and asking what exactly does she do (?)

So against these great accomplishments for a young career, SPIN Magazine recently posted an article that encapsulated why Ora is so lampooned by the media. It all whittled down to limited released music in the U.S., too many mentions on platforms like TMZ and her management team that can make her the face of any label but can’t seem to promote her beyond Fashion Week.

The major thing about Ora is that she actually has talent and she can sing. As one of the better voices in pop music right now, her music has only been occasionally good. She has the same weird situation as Nicole Scherzinger‘s solo career and what plagued Katy Perry‘s first album One of the Guys. A great, even sometimes terrific voice, but used for crappy or unforgettable tunes.

Ora’s first album was largely a dud, but it’s funny how her collaborations have been the evidence to continue betting that she’s capable of musically winning. Her duet with Conor Maynard, “Better Than You” for his Contrast album, was surprisingly electrifying. She was a cute addition to Snoop Lion‘s (Snoop Dogg‘s then reggae moniker) tropical “Torn Apart.” She seamlessly joined in on Charli XCX‘s catchy-as-hell remix of “Doin’ It.” She became pop-bluesy for Charles Hamilton‘s “New York Raining” reminding us that the old Hollywood persona fits her well (makeup-wise she’s a fan of 1940s lip and rouge looks). And, I don’t know how SPIN found her singing the hook on “Black Widow” as “meh”, but Ora’s turn on Iggy Azalea‘s revenge rap, roared demanded and was still likably vulnerable while she sang

It indirectly seemed like a threat to all the critics that have routinely said, what is Rita Ora doing here.

As she’s attempting to jump-start her upcoming sophomore LP, that’s already been delayed twice, “Poison” is now the new lead single for it. It’s enjoyable with every listen and again her voice sounds powerful. But will she finally be given a chance by listeners to rule a portion of pop music?

As we currently await and witness how Ora will interject this 2.0 era, a handful of captured videos of her performances and acoustic sets prove that she’s more than a Jay Z approved tabloid staple. Like few other singers of this weird state of popular music, her voice deserves so much better than what she’s been given. Rita Ora has talent.

Below is the proof, that all this girl needs is a microphone (and an anti-mediocre song disinfectant spray). It’s time for her to start proving music critics wrong.

Her warm acoustic of OutKast’s hit “Hey Ya!”

Her acoustic cut of “I Will Never Let You Down”

Another great performance of “New York Raining”, here at the UK version of The Voice where Ora is a judge

One thought on “In Defense Of Rita Ora: 6 Performances That Prove She’s Got Talent”