14 Days Of Valentines: Day 2, An Appreciation Of Candy Hearts

Candy hearts. To me, that sounds like a match made in heaven. My version of a heaven where the streets are sometimes lined with chocolate and gumdrops and a chocolate river that’s just steps away to Instagram the shit out of (Willy Wonka in the house). And that heart, ideally full of love and affection, with the addition of sugar too? Yes’m.

Candy hearts, also known as Sweethearts or its more academic title of “conversation hearts”, are the most fun (and commercialized) aspect of the brief Valentine’s Day season that I look forward to every year. Once the holiday season ends post-New Year’s Day, I immediately think, it’s almost time for those candy hearts! *butterflies sweep above me in the air* I especially devour the Sweettarts version, but the taste of the classic Necco ones I’ve also begun to enjoy a lot more in the last two years.

This year, as February marks another year of growth and existence on this, to the contrary of what B.o.B. thinks, round yet cruel yet beautiful, daunting world for me, when my excitement kicked in for candy hearts on cue, I began to question if I was infinitesimally co-dependent on them subconsciously. They’re like Christmas music. No matter what I may be going through, and whether I’m single or not, candy hearts are dependable to lift my spirits when it’s time for them to come back ’round. They always have something nice to say! And they’re more than just mere sugar rushes. These tiny goodies are reminders of formerly lost faith. Who can say no to a treat that says “Love Me” or “Be mine”? Please. Let me eat up such sweet nothings and let them run through my system with hopes that I will release such wistful energy out of me and into the universe and I get it back tenfold. I’m reading a lot into these little candies, huh? If syrupy love notes are not your thing, you can most definitely find naughty or sarcastic ones candy hearts for the more openly cynical about VDay. 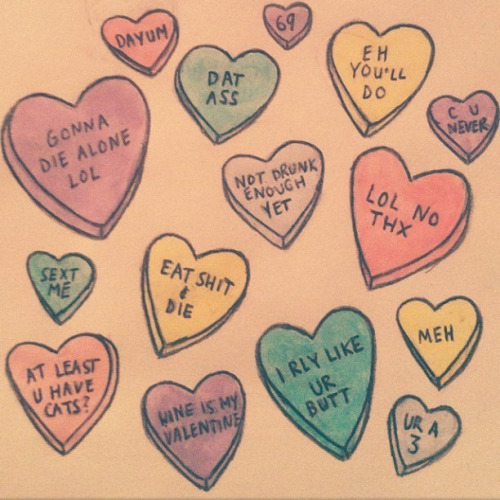 Valentine’s Day decorations have been out since mid-January in some stores. By February 2, they are everywhere once you step into a department store or pharmacy like CVS. But I don’t find it the avalanche of hearts on fire nauseating. Last fall, we all could’ve used a shrink on how to deal with pumpkin spice moving beyond just cookies and decaf to chips and Alfredo sauce. Maybe it’s because Valentine’s Day, as trivial as it can be, still reeks of love and romantic courtships. Even into my twisted adulthood, continue to feel like chimerical concepts. The actual history of the Christian based holiday and the mythology of cupids and love Goddesses and Gods that surround Valentine’s Day are very appealing subjects on a lazy Sunday.

Love. The perpetual, doesn’t make sense when it hurts us so bad but we all want it, topic of our everyday lives. Pass the wine.

Now it’s time for a “the more you know” cut! Candy hearts were imagined by Daniel Chase, the brother of Oliver R. who created a wafer candy machine and eventually founded the candy company NECCO, in 1866. Chase began printing quotes and sayings on candy and the edible novelties became common to serve at parties and special dates like birthdays and weddings. In 1901, NECCO officially introduced the Sweethearts. Well into the ’90s, some of the phrases have changed with the times such as by 2009 you likely ate a heart that said “text me” on it, but your brother and sister might’ve crunched on “page me.” The candy company Brach’s also makes wafer-like hearts and they are hot cinnamon ones available on the market too!

I just one want a candy heart that says, “You are loved.”