On February 20, the founder of BlackGirlMajik, Shydeia Caldwell, brought her cause of uplifting women of color to Boston’s Emmanuel College campus. Co-organized by the non-profit groups We Are The Ones and Encuentro Diaspora Afro, BlackGirlMajik, prior to the date, sent out an email blast to all Black women and women of color who were interested in attending the event. I became aware of it via WATO’s Facebook page. I was intrigued as Boston is often not the hosting home of such events. Yes, they are certainly people of color here, but most tend to depend on themselves and, if they’re lucky, close friends and family when it comes to discussing Black love and Black pride or cultural pride. Rarely, at least in recent years it seems, we get to have open forum events like BlackGirlMajik. In days, the event sold out and February 20 was here.

I wasn’t sure what to expect, except that I hoped it would be fun and inspiring. I was already familiar with WATO and EDA as I attended their December gathering of “Black and Latina Women/Girls Rising Through The Storm”, also held at Emmanuel. It was a great conversation in which I took down notes of sage advice and the names of important women and men I had no idea existed. At the start, the director of Encuentro Diaspora Afro, Yvette Modestin, initiated a moment of silence for the slain unarmed Black women victims of police brutality. For the moment, each of us beforehand was given a short piece of paper with a name on it. And if we were comfortable, were asked to say that person’s name out loud as Yvette sprinkled dust into the air and said a traditional word, I think in Spanish, in their memory. It was something kind and I wish I could remember. I do however remember whose name I said: Rekia Boyd.

For Black History Month, WATO and EDA got in contact with Caldwell and brought BlackGirlMajik to Boston. Based on their prior gathering, I figured this would be just as worthy of attending.

A little after 1 PM, the first thing we did was eat some food! Tickets were $15 and the money raised went towards providing not just snacks like Oreos, chips, and popcorn, but real food like plantains, fried chicken, and empanadas. It was so good! And snack wise, I was here for the Hi-C juice boxes. My nostalgia screamed and I drank about three of them. 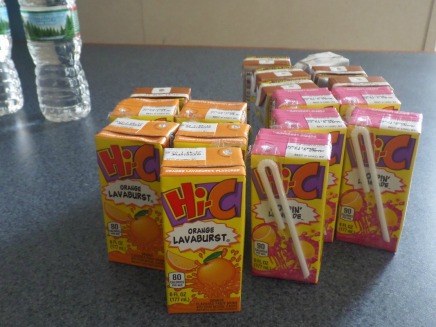 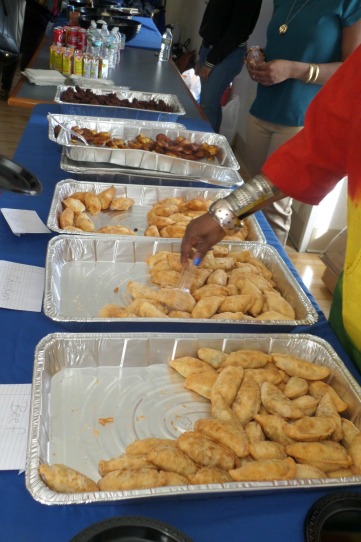 Once bellies were moderately full, the first real exercise was sharing what “black girl magic” meant to us. The slogan became a trending hashtag late last year and into 2016. The media even jumped on it with Essence having three separate covers for February starring Chi-raq‘s Teyonah Parris, activist Johnetta Elzie and Black-ish‘s Yara Shahidi. Teen Vogue also surprisingly welcomed the movement via their cover story on actress Amandla Stenberg as they also collaborated on videos celebrating and discussing black female beauty and confidence.

Yet “Black Girl Magic” or Black women doing great things and wanting to exhilarate their community, has always occurred. There is just a name for it now. I wasn’t sure what to think of it at first. I definitely supported the concept, but my inner cynical self towards the media and journalism got me in thinking, momentarily, is “Black girl magic” really a helpful phrase? It’s been challenged online before through blogs and talks that the idea of Black women and Black people as “magical” or somehow always able to repeal against inhumane acts, pain, and emotional distress without a tear in sight has been more damaging than elevating. Some Black women have argued that the term “strong Black woman” has caused unnecessary stress on Black women not allowing themselves to feel hurt and knowing that it’s okay to cry.

ELLE.com published a personal essay by Linda Chavers in which she wrote about how much she despised the catchphrase. In her mind, Black women experience real pain and managed to get out of bed and face the world on any given day was worthy of more acknowledgement than being glossed over as “black girl magic.”

Chavers, and ELLE, received backlash and mockery for the piece. I do appreciate #BlackGirlMagic, I understood Chavers. I’m not magical necessarily. I just try to keep my head above the tides of self-doubt and flaky individuals. That’s called trying to survive as an everyday human being.

After that free-for-all response for the next two hours, in mostly a large group circle, Black women of all shades, sizes, and backgrounds contributed personal moments of success and defeat. Unofficially, the first topic was cultural perception. One girl shared how it took her years to be comfortable in asking people to pronounce her traditional African name correctly. Another disclosed that she was no longer ashamed of her dark skin and how it combated what most people envisioned Cape Verdeans to look like. Same went for another dark-skinned young woman who is but also Latina. One girl who I sat nearby and seemed not much older than 21 shared that she came to the Black Girl Majik meetup because, while half-Black, was mainly raised by the White side of her family and mother. She attended because she wanted to connect with other Black girls. Sometimes within Black circles, we are taught or coerced to hate on lighter skinned women. Especially when White or Caucasians have elicited preference towards them when it comes to Black people. In reality, they are hurting as much as we do sometimes. Her comments were a hell out of a lot more poignant than the Light Girls documentary that aired on OWN last year (the sequel to the depressing Dark Girls). I was glad she was able to be with us.

That exchange was followed by the moments that exemplified “black girl magic” and exuberant recollections of performing in For Colored Girls in college, being the first in their family to earn an undergrad degree, or in teaching younger siblings and beloveds that black is beautiful filled the air. We also spoke of what was hard about being a Black woman sometimes, or better yet, when others attempted to strip of us of our joy about it. Many expressed how they went to schools or lived in towns that were predominately White and had experienced racism. Other common afterthoughts were that Black men didn’t appreciate us as much as we would like and too many misconceptions courtesy of tired pop culture gags or racism. 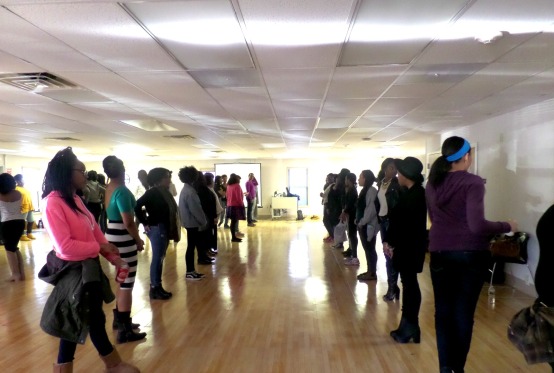 The most melancholy moment of BGM came when we were asked to close our eyes, again in a large circle, and whoever was willing, share what they were emotionally struggling by standing in the middle. One signaled their willingness by stretching out an arm and Caldwell would lead them.

I didn’t step into the middle, but I listened and sometimes took a quick, teary-eyed peek at who was talking. I was slightly jolted to see who was dealing with alcoholism in their families and feeling worthless after a relationship that ended.  I went to Black Girls Majik alone but my innermost thoughts, worries, and dreams were shared amongst 30 plus other girls that I had never met before.

After that tear-fest, we did another activity that was lighter (a kind of dance and sound collage) and then it ended! Black Girl Majik was accomplished. A general thank you for the event was said by Shydeia, Adebukola Ajao of WATO and Yvette, and then music was put back on and everyone either gathered their belongings or stayed around and mingled. 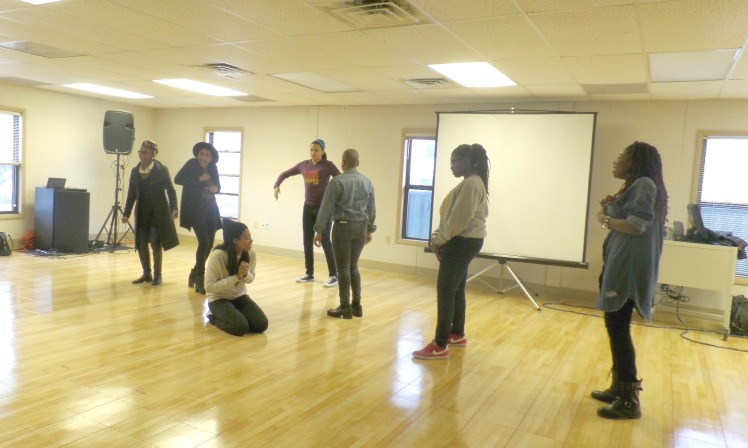 I certainly left with a better recognition of why the catchphrase mattered. It was important that I was touched by it beyond Twitter and Instagram and showcased to me through everyday women. It felt more sincere and soulful rather than the latest social media gimmick, even if well-intentional. I may not go tagging every selfie I have the courage to post with the hashtag since #blackgirlmagic post-BGM. But now when I see it written in the caption of a Black girl or woman’s picture or image, there is certainly less cynicism attached. And more of an acceptance that the truth being laid before me is laced with self-love and growth. That’s a movement I can co-sign. 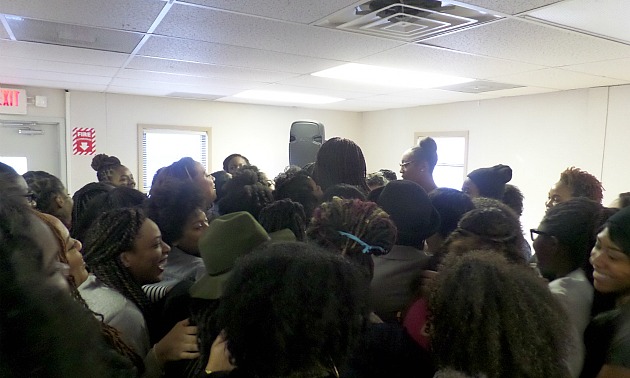