Milk Like Sugar is the kind of wordplay, that without hesitation, brings you to a halt. Printed on its promotional poster, in white, capitalized letters, against a hot pink background and a big baby bottle. I recall quizzically reciting the title of the play “Milk…like sugar…” I was enticed. What did that even mean? Did I miss something? All this time, milk is like sugar? I suppose if you think about how the liquid and monosaccharide are synonymous with feelings that are benign or occasions of lightness. I get the connection on a museful level. But like Roger in (1961’s) 101 Dalmatians, I remained on a stance of…”And yet I wonder…”

Since its 2011 debut, Milk Like Sugar has been in production, with its writer Kristen Greenidge earning an Obie Award from the Village Voice in 2012.

But before and like most of us, back in 2008, Greenidge was nonplussed by the occurrence of Gloucester High School’s “pregnancy pact” in Massachusetts, in which 18 students in a calendar school year got impregnated. When the news gained national attention, many in the media assumed a cult-like agreement existed amongst the teens. But shockingly, most of the baby-making was coincidental. If you’re from Massachusetts, it was more shocking for Gloucester isn’t on the same big-city scale as other Boston neighborhoods. It’s one of the quieter, sleepy, fishermen towns. Then again, maybe all that quaintness gave way to the teens being adventurous so prematurely. Nonetheless, it was scandalous and some of the teens were as young as 15 years old.

As a Massachusetts native, writer, and having given birth to her own newborn daughter at the time, Greenidge itched to explore the motley of reasons any teen would want to get pregnant in the first place. That is how Milk Like Sugar’s conception began. It’s not the end of the world to be a teen mom. But to fast forward the peaks and valleys of life with a baby in tow at just sixteen, or eighteen, is a burden past teen moms wouldn’t wish on the next generation. Why to some young girls it is worth the strain?

I attended the third to last showing of Milk Like Sugar at Boston’s Huntington Theatre branch at South End’s Roberts Studio Theatre within Calderwood Pavilion. Before the showing on February 25, a short “toast” to the play, with offerings of Nutella and jam spreads and bread, was held with an open discussion by a 35 Below program  (35 Below is a Boston Center for the Arts initiative, encouraging those 35 and under to get reacquainted with theater-going). 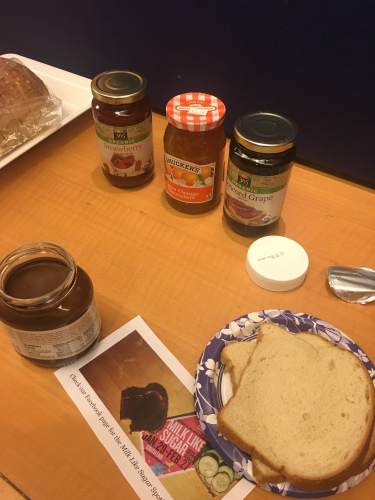 The discussion leader asked us soon-to-be Milk Like Sugar viewers about the prepossessions we had on teen pregnancy. I included that I felt and often read that young mothers wanted someone to love and love them back. Sometimes it was also just cultural. Another mentioned a lack of sex education and safety practices. There was the inclusion of how gossip magazines reported celebrity moms and glamorized accounts affected a teen’s mindset about motherhood. The 35 Below leader pointed out that months after the Gloucester 18 made headlines, MTV’s 16 and Pregnant became a surprise hit (leading into the Teen Mom franchise).

The performing space for Milk Like Sugar was much more intimate than I imagined. In my third-row seat, it felt no different than the front row in that I was going to be immersed in the days of the teen lives of Annie, Talisha, and Margie, the lead characters of Greenidge’s play (with direction by M. Bevin O’Gara). 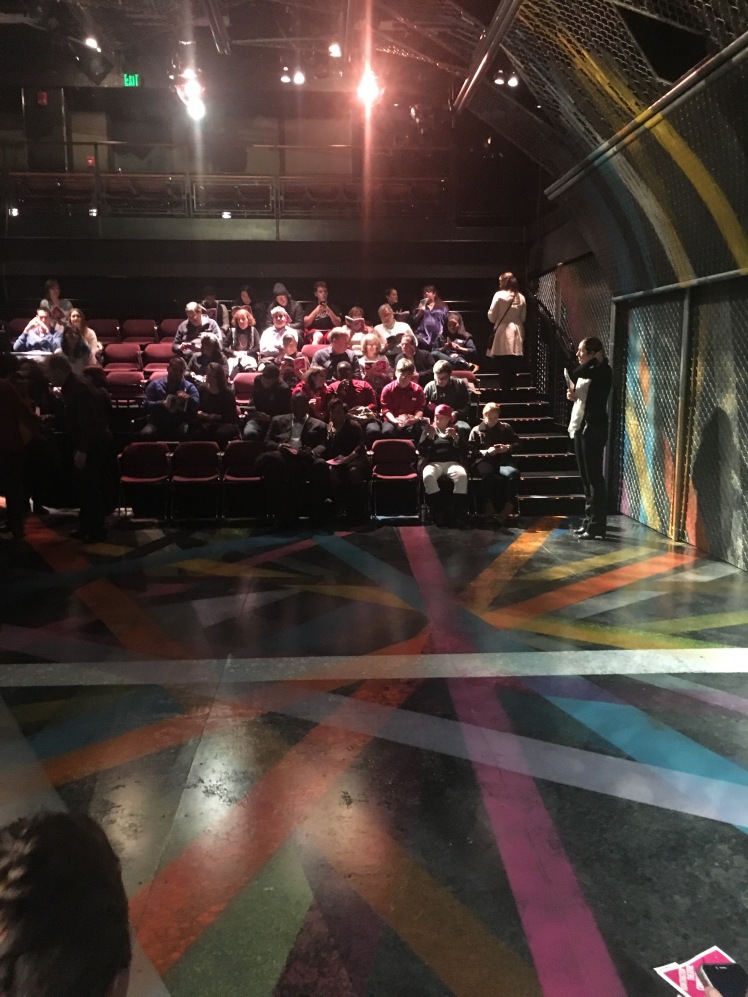 The lights went down and back up again and abruptly Beyonce‘s “Flawless” roared through the speakers. Actresses Jasmine Carmichael (Annie), Shazi Raja (Talisha), and Carolina Sanchez (Margie) hopped and spurted on stage. Excitedly they sang along to the booming track, clutching their cell phones and taking selfies. With a youthful cavalierly immediately established, there they were, the most colorful bulls in this china shop of new, thrilling, anxiety-packed experiences as teens in America.

The dialogue wasn’t hard to follow but instead fast paced. Greenidge impressively mimicked the colloquialisms of the youngest of millennials, along with the actresses monopolizing every moment to gum-smack and side-eye, juxtaposing raunch with lots of charisma. But because much of their thoughts on dating and impending (young) adulthood translated as naive, despite the charm, the audience were often reminded that the girls were still just kids.

Annie is the only character amongst the three with hints of decent grades and potential for college. She’s pressured into getting pregnant as soon as possible, so all three can be mothers at the same time, and have matching carriages, baby clothes, and a BFF lifestyle into their twenties. Margie already knows she is with child. Talisha is trying to be with a boyfriend she should’ve been kicked to the curb. But Annie doesn’t have a boyfriend and hasn’t had sex. She is, however, curious about challenging what is expected of her and if, at sixteen, she really has the license to do whatever she pleases (just like her friends). 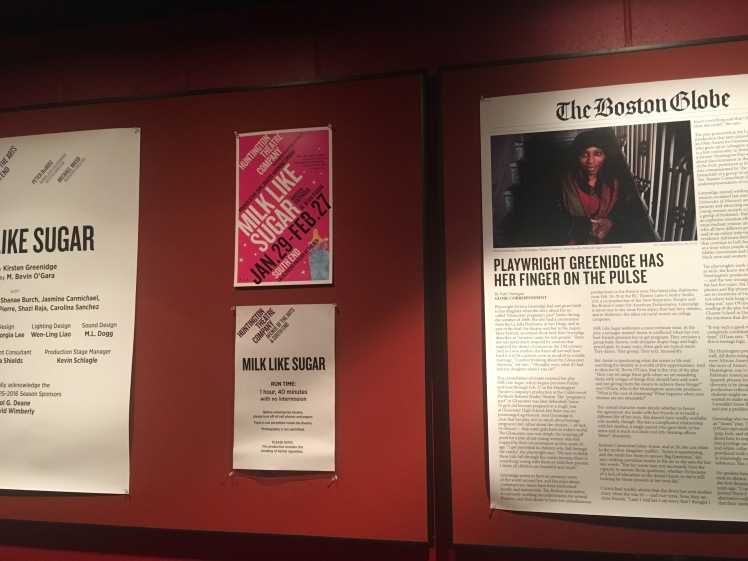 Talisha is the most aggressive. Not liking to take “no” for an answer, she is super flashy with her glittering Puma wedge sneakers, blonde and brunette long braids, and around the way accent. With that being said, Raja is fantastic as the hard to break, secretly broken down Talisha. She’s fully aware she needs saving from the demons of her latch-key teen life. But she behaves completely hopeless, wondering if she’s even worth the fight at all.

Margie is the meekest and overtly baby-like. Stylistically, she’s a bit of a Lolita, wearing frilly skirts and barrettes in her hair but is sexually active. Sanchez is convincingly wistful.

Annie is the common ground. The most Instagram-worthy thing about her are her long, red nails that swayed in the air when she had enough. She’s the most inquisitive. Acting-wise, Carmichael is a natural.

As the play went on, Annie contemplated where the point exactly was in their baby-having pact. Her afflictions split between loyalty to her friends and wanting to believe she had the right to “Girl, bye!” her listless surroundings. Annie is a smart girl that’s deeply misguided about putting her best interests first. It seems that at her core, she is afraid of taking chances and feeling alone (at times) in the process.

As a production, I found Milk Like Sugar terrific. The cast from lead to supporting was keen on displaying every mannerism and nuance of their roles. And based on YouTube clips of past showings, the cast that performed in Boston exemplified the teen, queen sassiness, and anguish, of Greenidge’s imagination. The actors were truly wonderful. The sets moved from scene to scene effortlessly as well as the cast themselves rearranged and moved props. The music transitions also attempted to foretell.

And what did Greenidge mean in saying “milk like sugar?” It came from a line Malik, one of the two male figures in the play, played by Marc Pierre, said to Annie. Malik is one of few people in Annie’s circle that’s not only mindful and hopeful of the future. He desperately urged for her to feel the same.

After adjusting his old school telescope, during their puppy love date atop of a hill, the ceiling became pitch black with many light yellow dots as the stars above. Then, Pierre delivered a beautiful monologue on why he refused to let his life “expire” by the end of his high school senior year.

“I don’t like those people up in that plane laughing at me. Cause the way I imagine it, they see me from my window, Annie. They see into my window, they see the paint curling off the walls, they see my mom ain’t done the washing in weeks, they see there ain’t more than two packages of macaroni and cheese in the cupboard. They see that and they mouths crimp up into smiles and I wanna crush those smiles. ‘Cause all they see is some bone head baby daddy don’t know enough to use a rubber and end up stuck — paint curling, milk like sugar on the shelf.”

Like an interpretation of Langston Hughes‘ epochal poetic contributions of “What happens to a dream deferred? Does it dry up like a raisin in the sun? Or fester like a sore–and then run?” Malik was referring to manufactured powdered milk, a product all-too-common in his and Annie’s neighborhood. It symbolized their city culture of young baby daddies and baby mommas. Sitting in the audience, hearing those lines, I thought it was pretty damn cool that Greenidge thought of that as a euphemism of dreams forgotten or lost. Milk being “like” sugar is the curdling of teen dreams everywhere. My wonder was satiated.

Annie and her friends all had turning points by the time the ceiling glimmered with yellow dots for the third and last time. And while Greenidge did not once judge her characters for their predicaments and hopes that they hoped for. You felt that by the end, she wished that (most of them) weren’t so damn insistent on learning lessons the hard way.