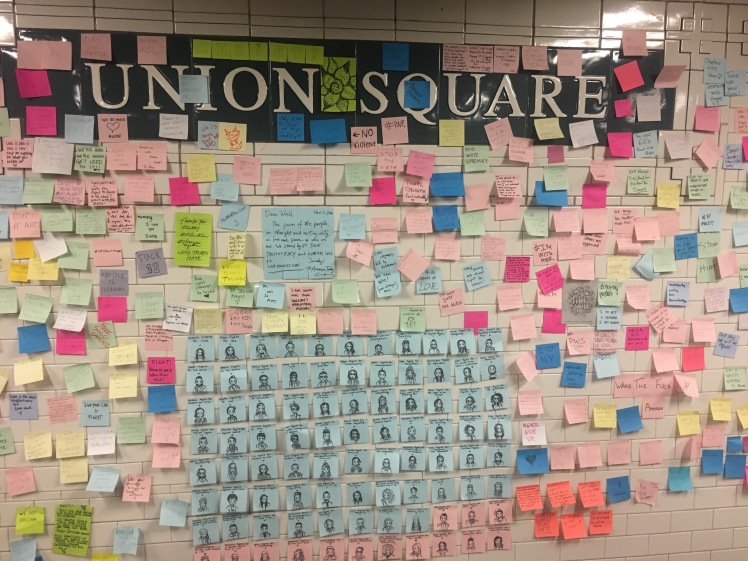 There is a lot to hate about New York City.

To react so towards it, is almost a sport.

But there are equally as many amazing factors about the most impossible city in America that makes it memorable for a lot of right reasons.

One of its greatest features is street art and impromptu (to an unbeknownst public) activism. You can spend a whole day in any neighborhood across the boroughs, (here’s a wink to Lower Manhattan and Brooklyn areas East Williamsburg and Bushwick) and observe some of the world’s, yes, the world’s most talented and subversive artists and their work.

Graffiti expression naturally at times extends itself to the written word. Short poems and quotes will stop you in your tracks on the way to the bodega.

One of the latest presentations of street art and words is currently exhibiting inside Manhattan’s East 14th street station at Union Square. Envisioned by Matthew “Levee” Chavez, he commenced on Wednesday, November 9, the impactful project of Subway Therapy. It was, then, the day after the 2016 Election and what is being called the biggest upset in U.S. election history. Donald Trump shockingly clutched the win as the next President-elect over the qualified Hillary Clinton. Through the use of regular, colorful Post-Its or sticky notes, Chavez hoped to encourage messages of love, self-expression, and support amongst the many New Yorkers bummed or worse, devastated by the election results. (Clinton won the popular vote. Trump, the archaic Electoral College). Chavez wanted those same people affected to write their feelings out.

Union Square is one of the biggest MTA stops in New York City. It is a major intersection that connects commuters to the east side of the Bronx and the L train into Brooklyn and Queens. There’s also the N, R, and Q trains and the underpass towards the west that leads to the 1, 2, and 3. Its selection for Subway Therapy is a wise and accessible choice.

Since Thursday, October 10, thousands have residents, passerby tourists, and even New York Governor Andrew Cuomo, were brought to action and shared their thoughts for the city to see.

There are people in New York that voted for Donald Trump. Tabloid paper The New York Daily News exposed Staten Island’s White residents that voted red, or Republican. However, Trump’s home state was a majority 80% blue for Clinton. Since November 9, protests have been organized and executed into the streets against the President-elect. From New York City to Boston, Portland in Oregon, Miami City, Chicago, and San Diego. Signs and chants were announced with rage but sympathetic to combating sexism, racism, and anti-immigration. Just three of the too many acts of hate that were awfully illuminated throughout Trump’s entire Presidential campaign.

I was at Union Square Station over the weekend and I viewed the Subway Therapy walls across from the 4, 5, and 6 trains. Pictures and videos were being taken of the growing day by day artwork, as others were sticking their contributions, or writing on a Post-It.

Subway Therapy is provocative in that it compelled so many faceless individuals to share so publicly. Clinton supporters were vocal on being “with her”, but it became evident that some Trump voters didn’t feel as comfortable (unless they actually attended a rally) to show their “Make America Great Again” xenophobic train pass until after November 8. Seemingly a lot of those at Subway Therapy were/are Hillary supporters. But the bigger picture, and mission, as proven in the rainbow occurring below 14 street, is how to cope with disappointment through healthier and more collaborative circumstances. In this case, in light of a Trump Presidency era.

Subway Therapy’s beauty comes from everyday people. What we see from them isn’t the physical but the mental and personal. It’s the most thoughtfully orchestrated Tumblr page come to life.

Minutes after I had arrived, a White woman came to look with, presumably, her daughter or granddaughter who had a light brown complexion and curlier hair texture. As I perused the wall, I also watched how the woman explained the scene to the young girl. As she gingerly led her closer by hand, the woman simply said, with a noticeable level of sensitivity, that people were expressing themselves over the election and how disappointed they were. The little girl nodded and seemed hip to the fact that people were upset. But just how sad they were struck her senses as she grazed the notes before her.

I took more photos of my own and read batches of the messages. I agreed with most of them and chosen notes did not hold back pure indignation. Understandable. The week of the 2016 election was historic in the most frightening way.

There is no word on how long Subway Therapy will be around for. Considering we’re in store for four years of the Donald Trump Administration, the real American Horror Story for a lot of New Yorkers and much of America, further reincarnations of therapy will likely be induced.

2 thoughts on “The Writings On The Walls: Subway Therapy Is An Open Forum For Post-Election Grief & Hope”