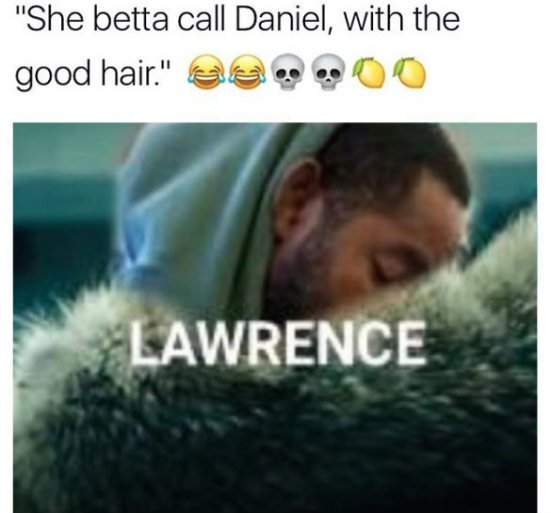 It’s been 72 hours since Insecure aired its season 1 finale and it was yesterday morning that I believe my composure (about it) came back to me. I haven’t had a show get me this riled up since…I can’t even remember. As a viewer, I’ve of course experienced little jolts and “oh shits” at a scene or dialogue I didn’t expect. But episode eight of this series left me contemplating my own past decisions in relationships, questioning how vindication is won when heartbreak is involved. And just how awful it is when the good guys go bad. That’s a lot for a viewer to carry, considering Insecure is listed as half-hour “comedy.”

In my small silver notebook, written in the days since Sunday night, the notes reflected my emotions about Insecure‘s finale. Absolutely scattered. Where to start?

Well…the ending. Beginning at the last five minutes, it seemed Issa Rae‘s namesake lead character and boyfriend Lawrence (played by Jay Ellis) were going to work it out. (And my view of this potential ever after turned me into a negative Nancy. Only in TV land does a man actually consider forgiving his long-time girlfriend for cheating on him). But I was wrong. We were all so wrong.

As Issa moved from lovingly grazing his house keys next to hers and walked towards their bedroom, she looked around and became aware that the apartment was oddly empty. His pillow on his side of the bed was gone. Then she turned to the closet to see his Best Buy employee shirt hanging in the closet. He used to work there. Her body froze but her mind was frantic. She was desperately trying to puzzle together what was otherwise clear. Lawrence was gone.

The scene that left Black Twitter gasping for air, nevermind clutching the imaginary pearls. A cutaway to a sudden, excessively graphic sex scene between Lawrence and Tasha (portrayed by DomiNque Perry), the bank teller who was crushing on him not too many episodes ago. Lawrence had told her he had a girlfriend, and while flattered by her attention, stalled at making any moves. (Maybe I should’ve seen this coming. In one of those episodes, she walked into Best Buy while he was working there, with a Fashion Nova, cleavage exposing top. Really? I’m secretly hoping she pulls a “Needed Me” on him come season 2).

My face in watching what had unfolded was no different from when I finally viewed the original Texas Chainsaw Massacre. Mortification. But unlike, Chainsaw, there was also, and the chagrin is real in admitting this, a thin layer of acknowledgment that the sex scene unlocked any aphrodisiac feelings in me. It was crude, animalistic, and as realistic as Taraji and Tyrese in Baby Boy. I have seen a lot of sex scenes in my time. This was depraved (And I’ve tolerated sex scenes from GIRLS that were gross). I was turned on, pissed off, and confused at the same time. What the hell did Lawrence think he was doing. And Tasha? Was she stupid? And when did this happen in the time frame of the show?

Let me continue in trying to piece my thoughts together…

I had to consult social media on this one. I was too lost in an emotional frenzy to understand what I just viewed. I wasn’t alone. It looked as if half of Black Twitter got from the cutaway that Lawrence had moved out and made it clear to Issa that he was moving on by not just leaving his keys, but his Best Buy shirt. The rest of us were still stuck on the fact that he had called Issa two-three hours ago, after turning down $200 for a blow job or $400 for sex from a stripper at the club, and said that he missed her. Like the heartsick fool we’ve all been once, Issa left her girls weekend in Malibu and rushed back to kiss and make up. And only because Lawrence had shared an agreement of “let’s talk about it.” How quickly that went to shit was a major part of the mortification.

What Lawrence did was typical. It was sleazy, scumbaggy. We witnessed the male ego bruised, emasculated, and unsettled, trying to reboot from a quasi-newfound I Don’t Give A Fuck ideology. By episode 8, titled “Broken As F*ck”, Issa had slept with Daniel, her ex-something, sort of one-time boyfriend, and while they weren’t technically broken up, Lawrence went ahead and slept with Tasha. Lawd Jesus.

As a viewer, all of the characters could not have looked or behaved more insecure. I know because I’ve been each and every one of them before. Issa was lovesick/heartsick insecure. Lawrence was hurt and inflated insecure. Tasha, yeah, she’s not getting out of this, was pathetic insecure. Look at the facts: how fulfilling is rough sex at 4am in the morning from a guy that claimed he had a girlfriend and when he finally gets a hold of your number, reaches out then? Sex, as it was vividly delivered in that scene, can come from a place of passionate love, (I know, hard to believe) but that’s absolutely not where this was birthed from. It was pure revenge smashing and in retrospect, looked dangerously painful. Tasha’s self-worth couldn’t have been lower. Looks like she couldn’t wait to pass the hazing and join Issa’s and Lawrence’s complicated club.

I was so invested in this hot mess of a downward spiral, I imagined what the morning after must’ve been like for these make-believe characters in front of my desk computer this past Tuesday. 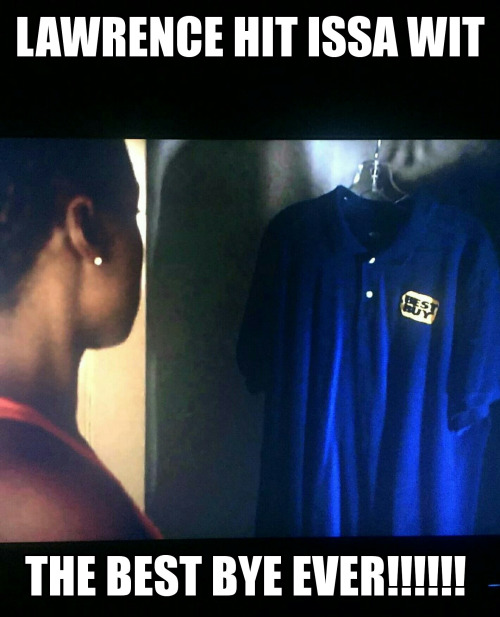 While Rae wrote the episode, I know, I know, this had to have been discussed in the writer’s room. Somebody definitely went though this or did it themselves. I believe that’s why it struck so hard on both male and female viewers. Next to the explosive sex scene that was, let’s say it, pornographic. It was the presentation that led to it. Heartbreak and want will lead you to do crazy things to validate yourself or escape from it.

On Twitter, it was a battle of two wrongs don’t make it right versus Lawrence was just trying to get his groove back (at Tasha’s expense). There was also the matter of, was Lawrence really such a good guy as he was framed to be from episode one to the first fifteen minutes of episode 8?

Issa made it clear in episode 1 that she was tired of her relationship with him. Their established Netflix and Chill (super chill) lifestyle was uninspiring. This annoyance nearly led to her having sex with Daniel. (She still shouldn’t have done it). While Tasha was stroking his ego, because he was a good man with at least no kids according to her, and depositing his unemployment check, Issa was contemplating whether she should remain encouraging with a strained smile, or just break up with him.

The reality about Lawrence is that he did come across unintentionally annoying. Not lazy or unmotivated, but annoying and boring. He was just kind of around. “Issa’s boyfriend Lawrence.” Sigh. A damn bummer.

I’ve come to the conclusion that while this aspect of Insecure’s finale was unexpectedly hard to watch. It made me more eager to leave my twenties behind. Issa’s character is same age of me, 29, but I observed and got caught up myself in similarly depressing or naive scenarios in my mid-twenties. Back when I was a headless chicken in New York. “Broke As F*ck” really held a reflector to my past, and it seemed to begged all viewers to never be as foolish as these characters again. If you can help it. But we are flawed people.

Situations like all of the above make for fantastic television. The kind of television that got you talking for days. But in the real world? The tears burn as much as a bee sting, empty sex only makes you want love more and the how quickly a heart can drop is actually very devastating to experience.

I can compare my anticipation for season two to that of One Tree Hill and The O.C. from back in my tween days. (So sue me). I’ll be raising a glass of wine til then that I’ll always try get out before it’s too late. Because guess what? I need to sleep at night.