I could’ve sworn there was a solar eclipse sometime in the 1990s. To make sure my memory wasn’t completely failing me, I went to Google to expedite confirmation.

A bunch of recognizable sources was listed on the results page and I chose Wikipedia (I know, I KNOW) because I needed some plain English explanation for my reasoning. Four years in the decade experienced celestial beauty in the sky: 1990, ’91, ’92, and ’94. I was in first grade by either 1992 or ’93, so around that time and up until at least sixth grade, during the science segments of my schooling, a heavy focus on the solar eclipse was handed to me and my peers. Looking back, I also think that teachers reveled in talking about  the wonders of the sky above, and in the form of eclipses and stars–stars that looked just like the ones given to us for a job well done on an assignment–because while we can learn about space thanks to years of astrologists, mathematicians, and scientists doing the groundwork, for the majority of us, connecting with the sky is a dream. It is both wistful and intangible. We speak to the sky in our minds, hell, sometimes out loud. We send it our wishes, often through heartfelt prayers. And yet, we will never know what it really feels about us humans.  I wonder just how many secrets, fears and hopes it has contained since recorded history? A solar or lunar eclipse is just another reminder that we are not bigger than the universe and maybe magic really does exist.

As we know, an eclipse is when the moon passes the sun and while a confluence occurs, ultimately the moon “occults” the sun (sounds ominous, huh), possibly completely blocking the sun’s brightness. A dark cast reigns until the moon slowly drifts away, returning later for nighttime (in everyday people understanding of how this all works). It’s like witnessing the moon ingratiate itself with the sun’s equally unique purpose. “Hey, I wanna see what this is all about. Being all sunny and shit.” The sun tolerates its kid sibling moon until babysitting is over. “See you at dinner after I settle in from sunset.” (Making up stories for the sun and moon is almost as fun as doing the inner voices of babies and animals).

Below is a wonderful video from National Geographic on how eclipses occur and the types that exist.

In the 24 hours leading up to August 21, 2017’s totality eclipse, excitement reached high and large as it would be the first contiguous total eclipse of the sun that could be seen on U.S. ground since 1918, 99 years ago. As The Guardian shared: “It will be the first total solar eclipse in 99 years to cross coast-to-coast and the first to pass through any part of the lower 48 states in 38 years.” The 38 years part is in regards to February 1979.

Leading up to Monday, more facts like that and videos were shared online. One clip was especially touching and mainly because of what the newscaster said at the end of the broadcast.

On February 26, 1979, New Y0rk-based ABC aired live footage of the eclipse taking over in Portland, OR. (Oregon has proven to be the best seat in the house when it comes to U.S. eclipses). Headlined by newscaster Frank Reynolds, the clip available on YouTube is ten-minutes long and it is at the last minute as phenomenon winded down that Reynolds gave the roseate wish of better days and peace realized ahead in the new millennium:

(After announcing that the next eclipse of that kind wouldn’t occur until August 21, 2017–imagine saying that in 1979–): “May the shadow of the moon fall on a world at peace.”

His wish was almost like a proviso to the future. Please do better because we know you’re capable.

As millions of Americans begrudgingly continue to co-exist in a Trump presidency era and just a week ago, Neo-Nazis and White Supremacists bitterly paraded in Charlottesville, NC, leading to anger and hurt from counter protesters and the death of 32-year-old Heather Heyer, after a racist madman rammed his car into a crowd, Reynolds’ words glowed with the sting of peace being currently challenged to the nth degree.

On eastern standard time, August 21, the 2017 eclipse was predicted to be seen around 2:45 PM for two minutes and some change. I had completely forgotten to get eclipse glasses and was all too dependent on hand-outs from anywhere to cap for me. The Boston Public Library was handing them out, but their stock emptied by Monday morning. After reading on PopSugar that selected retailers and stores were carrying ISO-approved glasses, one of them was 7-Eleven and the one near my job was sure to put a sign on the entrance stating they did not have any.

I settled with the hope that someone would be nice enough to share their glasses with me.

As I waited for 2:30 PM so I could head outside to Dewey Square, I loved that Big80son8 on SiriusXM radio was still queuing up Bonnie Tyler‘s 1983 iconic hit “Total Eclipse of the Heart” and Duran Duran’s bombastic “New Moon on Monday” (released 1984) throughout their usual mix since that morning. Tyler took it further and performed the song on Good Morning America and then at some point while the eclipse was taking place, again with the quartet DNCE. Talk about meta.

Promptly at 2:30, I left my desk and headed to the bathroom to apply Maybelline’s Vivid Hot Lacquer in “Major”, a wicked navy blue. I wanted to wear it for the occasion, but  I’m still learning how to apply it so it runs less streaky and how to rock it in general as green and blue lip shades are beyond tricky. You don’t wear these colors to blend in.

Heading outside, herds of people were already anticipating like the schoolchildren we all were once. I went to Dewey Square as planned.

A minute and a half away, a woman and her friend were kind in letting those near her try on her ISO-glasses. Right as we all thankfully finished a test run, a reaction arose and everyone instinctively looked up and there was a faint crescent moon in the sky. On the east coast, the eclipse’s appearance wouldn’t be as high in percentage as say the west coast or heartland, but we were very much aware of the horror story shared in the last 48 hours of not looking up directly at the sun during an eclipse because it could cause serious eye damage, even blindness. Forgive us, Father, because we did look up.

By 2:46 PM, the crowd had gotten bigger and my small circle was still sharing glasses from the kind women. With the glasses, the eclipse looked like a perfect Sailor Moon crescent moon. What a treat. 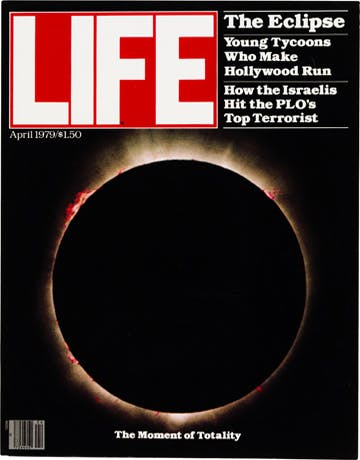 I’m glad I participated in the “Solar Eclipse of 2017” and not once felt silly for doing so. I certainly wasn’t around in 1918 and can only dream of having been a ’70s kid to witness ABC’s coverage in 1979. The solar eclipse of 2017 was a good time. Thank you for reminding so many of us of simpler times and the joy of nature, otherwise known as God’s work.

Eclipsing like it's 1979 🌙#PolaroidFx #SolarEclipse2017 "May the shadow of the moon fall on a world of peace." pic.twitter.com/U0dTICnsCV