The Return of a More Inclusive Almay

*The Return of a More Inclusive Almay

Color me surprised when I saw Almay’s latest commercial starring Rashida Jones. Jones may be on the lighter-skinned spectrum of celebrities who are biracial, but nonetheless, what was Almay–that hadn’t had a spokesmodel of color in years–doing promoting products with her? Was what I thought was happening really happening? Hmmmm.

When I began to see photos of their latest foundation, Best Blend Forever, my suspicions of a new Almay on the horizon were confirmed. Awaiting me at the end of the Best Blend color spectrum were three salient shades of brown. In person, on an Almay display at CVS, it was as if the triumvirate shimmied and winked at me, translating to a, “Yep. It’s happening!” 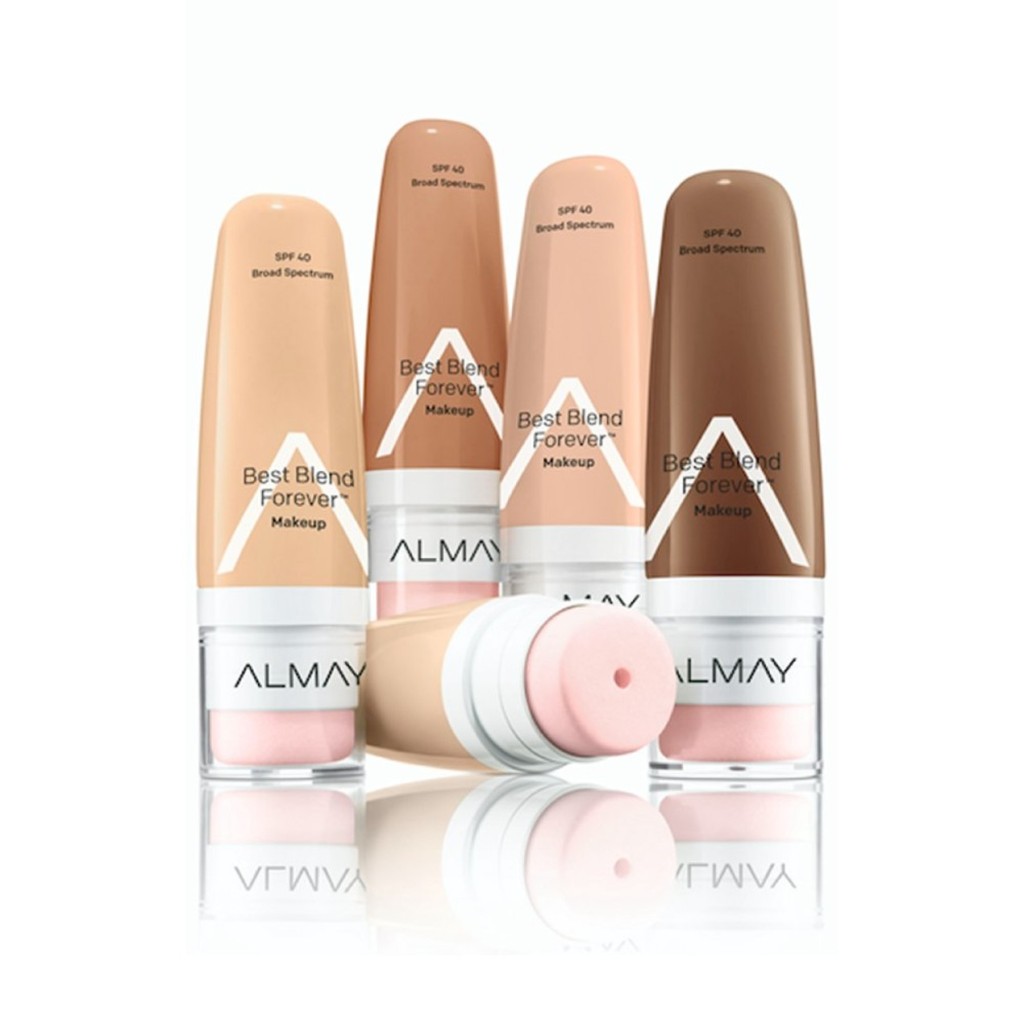 For years, Almay hadn’t sold a shade beyond “Warm” (usage of this description can be subjective in makeup) or “Sand”, and it was sadly accepted for just as long that Almay wasn’t a brand for anyone who identified under “Caramel”, “Cappuccino”, and “Mocha”, shades now proffered to consumers. But truthfully, Almay used to sell such shades for women of color in the past. Is this inclusion of the three hues a return to form? Or a post-haste response to a makeup landscape that has frantically responded to demands for inclusivity now that we’re all beautifying ourselves in a post-Fenty Beauty world?

“To not be inclusive was hurting our hearts”,  Amanda Ashe, an Almay representative, admitted solemnly. More cheerfully, she reassured that the new campaign of “Reveal the True You”, “has been a game-changer for us.” The welcoming tagline and brown shades signify that the brand “wants to be hyper-aware going forward.”

In the 1920s and early 1930s, makeup and skin care were nationwide crazes that Hollywood’s earliest movie stars and everyday women partook in. But by today’s standards, products were made of heavy pigments, lipsticks carried heavy fragrances, and up until the 1950s, the chemical element of radium was custom to include in cosmetics (and even chocolate).

Fanny May was one whose skin was irritated by the trendy products of the Gatsby era. Her chemist husband Alfred Woititz was concerned and this led him to experimenting and breaking down some of the makeup she had applied to discover what had vexed her skin. Together, and with the guidance of dermatologist Marion Sulzberger, a lighter formula of makeup was created. In 1931, Almay (Al for Alfred; May for Fanny May) emerged as the first hypoallergenic makeup line on the market.

Though other brands, such as Max Factor, Maybelline, and Helena Rubenstein, gained a lot more pop cultural clout, as trends came and went by the decades, Almay stayed afloat in offering the same products such as cake eyeliner and bright eyeshadows, while remaining hypoallergenic, its sole purpose as a brand. Foundation shades that could suit Black women remained non-existent from Almay. Brands that however catered to this categorical group of makeup wearers like Fashion Fair, Floris Roberts, and Zuri flourished in the 1970s. These brands were a part of the larger zeitgeist of Black Americans and people of color celebrating their beauty and features.

Almay was purchased by Revlon in 1987 and in late summer of 1991, it was announced that it was set to release a “Darker Tones of Almay” line, expanding its shade range into the deeper pool of cocoa colors for face makeup.

Before YouTube and Instagram became battlegrounds where consumers could berate any makeup brand for their lack of shade range, in the late ‘80s and early ‘90s, Americans of ethnic and multiracial backgrounds had grown tremendously. Analysts of the time confirmed their spending power had reached $500 million a year (by 1990),  so it was a smart business move and a matter of ethics for major brands, from Prescriptives to Clinique, to start providing makeup for people of color. It was equally vital to also formulate them with regards to the true vibrancy of undertones found in darker skin. (This remains a pressing issue, especially for lines with the temerity to only have one foundation for deep to dark skin or are rather gun crazy when it comes to red undertones. Around this time, a considerable percentage of Black women had also disclosed having to travel quite a distance from where they lived, just to get makeup that matched. This problem persists, on a smaller scale, for various towns and cities).

Top model Beverly Peele, who cat-walked for Azzedine Alaia and Versace, and covered magazines like Mademoiselle and GLAMOUR, starred in a now legendary advert that helped to introduce Almay’s “new range of shades for sensitive skin” in 1992. Next to the headshot of Peele’s gorgeously smooth complexion were small images of four products, including a chestnut hue tucked in a compact and resembling a perfect chocolate milkshake (but in reality), a tube of Liquid Makeup. 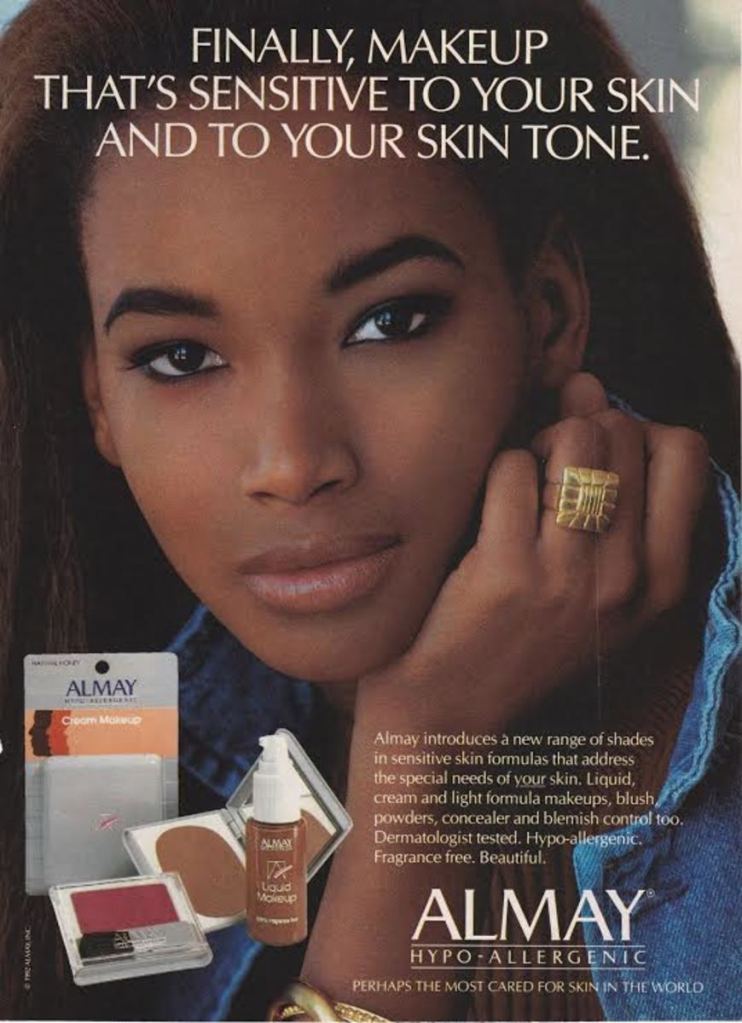 Forward towards the late ‘90s and early 2000s when model and former MTV VJ Karen Duffy and Courtney Thorne Smith (of Ally McBeal fame), both white, were hired as spokesmodels, the brand had steered into a presentation that was frankly square in commencement of their “One Coat” application maxim (still ongoing). While competitors like L’Oreal, Almay’s parent company Revlon, and the juggernaut of M.A.C. enticed customers with polychromatic campaigns, Black celebrity spokesmodels like Halle Berry, and continued to sell their (small number, for the former two) brown shades, such shades had completely faded away from Almay’s foundation arsenal. For their One Coat Lip Creams lipstick, a dark skin Black model smiled front and center in an ad published in American magazines. But that was it for diverse representation.

On message boards like Lipstick Alley (the Reddit of Black women during the Internet’s nascent social media days), the Peele ad was frequently shared among users and comments had built a mountain of disbelief that Almay ever sold makeup for Black women. This marked the brand’s dual disconnection from the general public and a new generation of makeup lovers.

Perceptions of Almay’s apparent exclusivity worsened when blonde-haired, light-eyed American Idol Carrie Underwood signed on as their latest celebrity face in 2014, succeeding Kate Hudson. She was initiated with new slogans that championed the “All-American Look” and “Simply American.” No brown shades were brought on board for the launch.

Almay’s delayed rebirth was developed by Antonette Bivona, Almay’s Marketing Director who has been with the Revlon/Almay camp for twenty-six years and counting, also serving Product Development. Revered as an “encyclopedia” in the company, Bivona’s cognizant of the harsh appraisals Almay has received. She is realistic about the sensitivity of the issue.

“During research for our new brand positioning, we received feedback, directly from consumers, that they had felt excluded from the brand and that our product range did not meet their beauty needs. This was never our intention,” Bivona said, matter-of-factly in an email exchange. “Our brand belief and product offerings should reflect the brand’s desire to be more inclusive. Somewhere along the way, Almay lost its way, targeting a small range of skin tones, most probably driven by sales or retail space.” Warmly, she added, ”We needed to reach a more diverse audience, specifically consumers who are focused on accentuating their natural beauty.”

For a long time, it was Bivona’s dream to re-introduce Almay as a timeless, but fresh and livelier brand, with nods to a population of savvier young adults. “Multi-faceted millennial women, at this intersection of style, culture, and wellness, are more aware of ingredients used in beauty. And while all-natural products are ideal, she is a practical shopper too. This is one of the more important parts of our refreshed brand. Connecting to this core group.”

As early as 2016, disparaging remarks continued to find Almay, but the brand was finally undeterred from their goal of starting anew (but still hypoallergenic!) with brown shades back on the vision board. In fall 2017, commercials starring Rashida Jones began to air and stream online.

Almay handpicked the comedienne, producer, half-Black/half-Jewish, and unapologetically feminist Jones for conscious reasons beyond her famous surname and Instagram count. “We wanted someone who really embraced the spirit and more than just the face. Rashida’s authentic, refreshing, and her effortless style made her the perfect choice. Beauty brands take themselves so seriously [and while our mission is], Rashida brings a light-hearted, fun tone to the category.” Bovina confirmed that she is also a “Creative Collaborator.”

The models are a reflection of a new day for Almay as well. On social media and adverts, they are adorably freckled all over, deep-toned with massively fluffy textured hair, and proudly Asian rocking a strong black cat-eye or swaths of purple on distinctive monolids. Flatlays show an eyeshadow palette, mascara, and a “Mocha” Best Blend on Instagram. Almay also openly fields feedback from their followers on all their social media pages, eager to form a community.

Aware that they had to change before the blitzkrieg of intersectional beauty in the mainstream, twenty-seven years later, Almay doesn’t want praise for the return of good intentions. They want to gain the trust of consumers they had let down for too long, now that they have diversified. “We have a long way to go,” Bovina stated, “But we’re excited about the first, important, steps we have made.”

*The review above is what I hoped would’ve been published on Fashionista’s website on April 5, 2018. As what commonly happens to journalists and writers everywhere, sometimes the version that is circulated to readers is not what the writer intended or wanted to share with you. What was published on Fashionista, I was not consulted once for when it came to editing and finalizing the article. This was an assignment in which I was passionate about exploring, not chastising.