Films about black women, even when based on the original works created and written by black women, are often helmed by male filmmakers once they reach the highest form of flattery: the visual adaptation. As Tyler Perry and Steven Spielberg translated For Colored Girls (2010) and The Color Purple (1985) to the big screen.

Yet back in 1991, Julie Dash’s independent film Daughters of the Dust was a watershed moment for women of color behind the scenes. 29 years ago, it became the first feature film, by a black woman, to be theatrically distributed in America. (And has since been recognized and included in the National Film Registry).

Since Dash’s tribute to black matriarchy, female successors of her blueprint have remained low on the radar. But it’s not to say strides haven’t been made.

As a kind of anti-blaxploitation movement began in the mid-1990s, after the wave of gangsta-reality films like Boyz N the Hood and Menace II Society (though not exactly in the same category, but of the era Above the Rim is a personal thumbs up from me), some of the most popular black films were still directed and/or written by men such as Soul Food, Brown Sugar, The Best Man, and Love Jones. But STILL. Few of those films about life and love were through the black woman experience and only one has reached a treasured cult status which is Gina Prince-Bythewood’s beloved debut Love & Basketball.*

But can we shout-out Kasi Lemmons’ Eve’s Bayou though! Talk about underrated.

As we continue to revel in Lupita Nyong’o’s win for her heartbreaking performance in 12 Years a Slave and in being crowned Hollywood’s Great Diverse Hope, now comes the British film Belle. An anomaly when it comes to stories, past and present, centered on black people, women, and historical references. Belle is an ambitious project and a homage to love and courage, and is based on the true life of biracial* heiress Dido Elizabeth Belle Lindsay.

Categorized as an “illegitimate” child due to her controversial birth of being the daughter of Caucasian Englishman, the Admiral Sir John Lindsay and an African slave woman named Maria Belle. 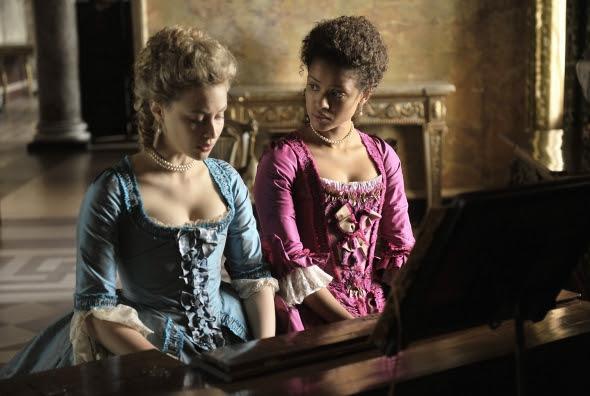 The film begins with the Admiral bravely pleading to his great uncle William Murray (the 1st Earl of Mansfield) to raise Dido amongst her cousin Elizabeth and within their aristocratic setting. Immediately Belle translates as remarkable for 21st century viewers. Here, a white man of a certain status (played wonderfully by Matthew Goode in a cameo) claims his black daughter as his own and there isn’t an ounce of shame exhibited in having fell in love with a black woman and in producing a child in the process. For so long through recorded history and media retellings, the modernized viewer has only heard or read about the brutal tales of how of these “illegitimate” children were often abandoned by one of their parents, whether it be their white father or black father, leaving a mixed-blood child feeling unwanted, out of place, or unloved. Sir Lindsay’s sensitivity to Dido sets the tone for the film and her sense of self-love even when she feel’s most dispirited.

*During the Harlem Renaissance, in a number of novels, the biracial experience was a pivotal attribute in some of the movement’s most accomplished works. And these which definitely included the act of passing (living life as a “white” person) and was a topic close to home for the author Nella Larsen, as it was the main topic of her brilliant novels Passing and Quicksand.

In watching Belle*, it really is surprising that so little of Dido unknown beforehand. She is absent from textbooks, and if not for the 1799 oil painting of Dido and her cousin Elizabeth, by David Martin (that currently hangs at the Scone Palace in Scotland) her legacy might’ve been all together forgotten.

*The movie theatre in which I saw Belle, in New York City, is defunct. Check out photos from Gothamist, prior to its demolishing.

Thankfully, due to the curiosity of filmmaker Amma Asante, Asante fought to get her story told through the small batch of evidence from the Earl of Mansfield’s writings.

Belle is eloquent, distinctive, and laced with romance, even with its typical reality checks of racism spewed from those who were fearful of the presence of a Dido (especially one treated nearly as delicate as any white aristocrat). It feels like a fairy tale, and it’s a fairy tale that stars a heroine that reflects the other side of womanhood. There is so much to appreciate and swoon about Belle. While its interconnected points of racism, abolition, love, inheritance, and progression do not get lost along the way.

The decor and costumes replicate 18th century England flawlessly, the dialogue is healthily sprinkled with feminist roars, and the acting feels organically top-notch.

The lead Gugu Mbatha-Raw is a candescent choice who herself is of a biracial background and she shares the screen with veterans Tom Wilkinson, Emily Watson, Penelope Wilton, Miranda Richardson, and then there’s Sarah Gadon (as cousin Lady Elizabeth), Sam Reid and Tom Felton.

*Later in 2014, Mbatha-Raw’s starring role in Beyond the Lights, was directed by Love & Basketball‘s Gina Prince-Bythewood.

As actors, they were emotionally rooted in expressing the bigger picture of how a community’s effort to allow change to occur was a burden of various reasons, depending on the individual. Each actor also dabbed a little bit of humor in their roles. There are also many great lines, often spoken by the actresses that are very caption-worthy. The comments range from racism but also sexism, as Dido retorts to John Davinier (Reid) in a minor spat (the following quote is partially paraphrased): “How can one [define] the ways of a woman when he was yet to know the ways of a gentleman”. #BOOM

Critics are labelling Belle as a kind of black Jane Austen for a new generation. For years, works like Little Women and Pride and Prejudice (both in book and film form) were landmarks of women fighting the good fight of amalgamating life and love, but Belle is the first of this kind to feature a brown-skinned face.

Closer to the middle of the film, a touching moment comes after the Lord and his family have travelled to the city, so the girls, and especially Lady Elizabeth, can find future husbands. While staying at one of their estates, there is a black female maid as the housekeeper.

As Elizabeth and Dido get ready for bed, Dido tries to comb her massively curly hair that’s also frizzed out a bit. It’s also the first time as viewers we see her hair out and it’s texture full-blown.

The kind housekeeper asks if Dido would like some help, but once again, she is feeling low and unsure of everything in her life. She doesn’t respond and just sits on the edge of her bed super conflicted. The scene cuts to the housekeeper combing Dido’s hair in front of the mirror as she’s telling her to start at the ends. While a curious Elizabeth watches behind the maid, Dido and the housekeeper share a moment and a smile of black sisterhood. While it would’ve been easy for Dido to resist help or the housekeeper to not bother at all, it is one of Belle’s best scenes. Dido never denies or feels the need to belittle her black side, but she also doesn’t often get the opportunity to interact with a lot of other black people, so the scene was imperative to Dido’s growth and acceptance as a biracial black woman, which harkens to her father loving her as she was in the beginning. In embracing her background and in rejecting racist behavior whenever in her presence or as much as she can, this is also done in honor of her deceased mother. Dido’s confidence is illuminated through the kind gesture of a fellow black woman that in a way is letting her know she is not alone and seen.

New York Magazine’s Vulture critic, Bilge Ebiri, described Belle as “profoundly human”, and while the world’s history has more hate and disappointment than we would like to acknowledge, Belle is a reminder that they were people out there trying to do the right thing.

It is heavy on the romance, and again, it does feel like a fairy tale created for the ages. After the harsh 12 Years of Slave, and mocking of slavery from Django Unchained, Belle is a refreshing addition to the “slave narrative”, (although adjacent), the discussion of feminism, and black womanhood that a 2014 audience needs to be reminded of.