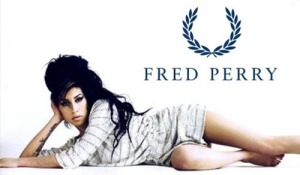 Last August of 2011, the first installment of the Amy Winehouse designed and influenced sub-clothing line was discharged by the preppy British clothing line Fred Perry.  The  joint line was delivered after the untimely death of the neo-soul chanteuse who died in July from alcohol poisoning (she was found dead in her house in the Camden neighborhood of London).

This side project of the controversially talented Winehouse was agreed upon months beforehand, and as promised, the clothes are emotive of the time period she admired and embodied for a concurrent day and age.  The collection that is presented in stores and online right now is the last one she participated in, and it will continue through a close friend of hers as the top designer.  Due to the sensitive issue of the line’s direct connection to the singer, a portion of proceeds will benefit the Amy Winehouse Foundation which is an organization that seeks to help those with substance abuse.

Fred Perry describes, in a blithe tone, the Winehouse selections to be wonderful “[references to] Amy’s love for ’50s Americana and Miami art deco”.  Along with naturally chosen garments in the form of polo shirts and dresses and V-neck sweaters, also presented and precisely beatnik with a quirky twist are halter tops, saucy high-waisted skirts and shorts, as well as “pumps” (tennis-esque flats).  The spring/summer 2012 collection is exclusively done with the color palette of pink, black, and white, with dabbles of baby and navy blue, vibrant red, and light heather gray.  The graphics feature gingham and argyle prints, and adorably drawn images of jukeboxes, cat-eye glasses, a couple kissing, and an ebullient Amy clutching a vinyl record, her puerile eyes wide with hope and love for the music she’s about to listen to.  The clothes (soft cotton and lightly rough viscose and elastane) are essentially everyday basics, but with the backdrop of music as the soundtrack, these basics are also layered rock and roll in the more classic sense of the days of 45 LPs and soda fountains (think of the costume choices of the Pink Ladies and T-birds characters of Grease).  The only item that’s really missing is a verdant poodle skirt.

While viewing the pieces, it is simultaneous sad to be aware that Winehouse is another gifted artist gone too soon, but her efforts with Fred Perry were keen on being a tribute to an era that so vigorously touched her, but are also inexplicably Amy as she made such a specific style very much her own.

this writer can be reached at jobsonworks@gmail.com

For anyone that’s religiously worn M.A.C. Cosmetics in the last ten years shall hurry to the company’s Facebook page (or on Twitter, type #MACBYREQUEST) and vote for the selected shades of eye shadow, lip glass, and lipstick chosen for their upcoming July collection MAC By Request, a very special culmination of fans (including celebrities like Kelly Osborne’s) most beloved colors that were previously discontinued.  If your anti-Facebook (which is a trend in itself), you can also text your pick (via 898622) by cell phone to M.A.C. by voting once a day for the same shade or eventually all 18 shades.  Ranging from pale shimmers to vibrant teals,  ”Cult of Cherry” and “Candy Yum Yum” have been some of the most begged for products to return for obsessive beauty routines complimented by M.A.C. items.

The voting polls are open from March 12 to March 30, and the top 3 winners in each category will be re-produced.

On a personal note, yours truly still has a lip glass that’s a hot pink fusion with an awesome silver undertone.  If only the name hadn’t rubbed off the bottom, it could be requested as a side note…! 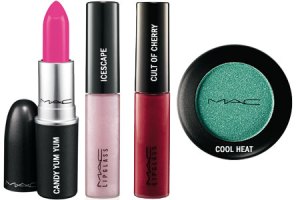 Here’s a link to the e-mail sent to M.A.C. subscribers:

Maybelline’s (semi-new) mascara Illegal Length may rival their very popular Falsies as their go-to product for wistfully curled eyelashes with awesome length.  It’s a reboot of their original formula with the addition of fiber ingredients for “instant lash extensions”. Promising 4mm of length, Illegal Length provide subtle glamour and once again shows that Maybelline may be the leading brand when it comes to drugstore mascaras.  It is one of very few wands (which is similar to the M.A.C. Zoom Lash brush) that really grabs every lash and frames your eyes.  It is a great mascara for day to night, depending on how you apply your eyeliner and shadows.  Illegal Length is what Lash Stiletto tried to achieve when it was introduced a few years back, offering a look of “voluptuous length”, but the wand never delivered in size or expansion, making for lackluster results.  Illegal Length even surprisingly gives a subtle panorama gaze.

this writer can be reached at jobsonworks@gmail.com