At Home On A Weekday? You Should Be Watching “The Real”

Fashion, relationships (and of course, sex), celebrity gossip, and everyday idiosyncrasies such as, you know, “ghetto” or “weird baby names” and bacon vodka, may all be topics just a bit too much when acknowledging you have a whole work day ahead of you or even before you’ve had your routine cup o’ joe or Earl Grey in the A.M.  Yet on the vivaciously entertaining new daytime talk show The Real, anything goes and will.  With a slogan that reads, “You Think It, They Say It”, this is not the average talk show even by today’s standards.  It’s super sassy, amiably conversational, and co-headlined by a diverse cast of known personalities and talents (Tamar Braxton, Loni Love, Tamera Mowry-Housley, Jeannie Mae,and Adrienne Bailon) that just like you have only recently configured the in and outs of handling the exciting task of emerging womanhood.  This is a show that truly represents the ambitious young woman that despite the odds are aiming to have it all: success, glamour, and love.

The Real is a cheeky tribute to the shows that came before it as since Barbara Walters’ well-meaning The View‘s debut in 1997, few other feminine, or feminist, oriented shows featuring a round table of women have entered the cabal of the televised woman’s roar. Other known shows include its successor, the equally as stuffy, The Talk, and a slew of solo hosted shows like the cocksure Wendy Williams and flippant Chelsea Lately.  The Real joins MTV’s uproarious Girl Code in exemplifying the women of Generation Y most efficaciously in that they are likely post-grad, in their mid-20s, or both.  Their indelible contradiction of apt awareness and compassionate tendencies triggers intriguing conversations and honest self-reflections and self-deprecation.  Specifically on The Real, the best thing is that as a viewer is to see the women genuinely engage with each other and value one another opinions even when they disagree.  While each has led a different path than the other in getting to their well-earned seat on stage, the journeys are gelled by a common truth of work hard, play hard, and girl power. 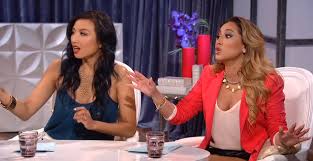 The show has been met with a great amount of fanfare online, and each episode has a celebrity or special guest (like the Prancing Elites–look them up). And it looks as though every week, a major fashion fix will be given to a lucky audience member in which they win a real designer item.  Two weeks in a row it has been luxurious handbags from the houses YSL (or Saint Laurent) and Louis Vuitton.

From its July 15 premiere, some interesting and chatterbox spark-plugs have been “Are You the Side Chick?”; if it’s really OK to have sexual relations under your parents’ roof (especially if you actually still live with them); Tamera’s admittance that she was a virgin until the age of 29 and then practiced abstinence until marriage due to penance; if it’s better to splurge on accessories than clothing (just stick to mainly basics, per former fashion guru Mai), and if enhancements are false advertisements on beauty.  These topics may seem banal to some individuals, but let’s be frank.  If a gathering of women are placed in a room to discuss various subjects, it will range from trust-worthy makeup products or a lack thereof in using them; disparate pay or treatment at the workplace; Michelle Obama; motherhood; to the impact of reality TV on women in minutes, and this is a guarantee when the women at hand are curious and considerably worldly.

So the next time you are home on the couch or still in your bed with a disheveled bun atop of your head that resembles Jimmy Neutron, tune into The Real and remember that it’s totally fantastic to be unmistakably a girl and in control, even if you’re finding it impossible right then and there to find a way towards a decent breakfast (or late lunch).

Check your local listings for air times on the FOX network, and is currently a summer series awaiting approval to join the Fall 2014 schedule based on ratings and press.  Check all social media outlets under TheRealDaytime

Here’s a clip of the girls discussing pre-nups: