Perception can be everything when reviewing the media, but what outsiders of it sometimes forget to cognize is that secretly, many outlets have an agenda. Think of the cable network Fox News. Don’t they always seems to go after the Obama administration, using the word “thug” to describe only black men, and have an odd backwards liking to the notion that a woman should only speak when spoken to? I’ve seen repeatedly online, for example, how one site will take something rather innocuous, innocent, or simply executed with no harm intended, and writers and publications take it so left field, it falls off the chart of complete rationality. I’ve written for some of these platforms before where my voice was changed to be more propaganda than professional. No, I’m not excusing projects that were released to the public and it was very hard to believe nobody in their camps had enough sense or enough education to halt production or offer constructive criticism and reminders, e.g. the song title for Justin Timberlake’s “Take Back the Night” or most recently, under the direction of Jeff Osborne, the lyric video to Nicki Minaj’s dark club of “Only” took cues in animating some of the most recognized images of the Nazis in the ’30s and ’40s.

The latest item in question, and plucked for all its debasing energy, is the soundtrack to slapstick “Literally, I Can’t” by Playz-N-Skillz, featuring Lil’ Jon, Enertia McFly, and Redfoo of LMFAO. If the song and band titles alone sound too ridiculous to bother, you’re right, and I wouldn’t have watched or listened to it otherwise because I already know how these “artists” roll, but it was how it was introduced to me that I acquiesced in the name of research. Through the always inquisitive and heightened nature of the Women sector of the Huffington Post, it was strongly felt that “Literally, I Can’t” was a desensitized take on “rape culture”.

While watching the video, with an unamused expression in tow, I saw scenes of mindless behavior courtesy of babied and sheltered privilege. It recalled the college years when Rihanna was musically still an island girl, and during this hyper-colored careless environment, they played off the overused phrase of (I’m guilty of still using it too) “I can’t”. “I can’t”, which was once regulated amongst the outside of work vernacular of black America when life and situations were just too ludicrous to take seriously, has became so mainstream, it has earned a segment of its own on MTV’s (brilliant) comedienne showcase Girl Code. I read HPW’s review of the video before viewing, and the quote below encapsulates their experience:

Literally, I can’t,” they say (literally a lot of times), before being ambushed by a horde of drunk, manic frat boy characters who invade their personal space and physically intimidate them. “Shut the fuck up,” the men chant over and over again.

I can see how Women got to that point. The sorority, valley girls speak sashay in repeating “Literally, I can’t”, the men bellow in return, “shut the fuck up” practically disregarding what they’re implying, which is “no”. Is the song and video rude, and packed with frat boy proclivities? Absolutely. To a fault. They’re almost in a trance about it. But, does it promote rape culture? That was a bit of a stretch of me. I wouldn’t have thought that without the disclaimer from HPW, and I still don’t think it after watching it, but I get how Women is showing how it all possibly starts with these kind of animal-like free for alls. If at all, the video fast forwards to what happens years after Peter Pan and the Lost Boys have still refused to depart Never-never land.

Over at Elite Daily, which exerts itself as the voice of Generation Y (think more so of the younger, last members of the set, like born post 1992-3), they had an entirely different take. As the kind of site you go to in reading pieces inspired by resting bitch face and The Hills, as you drink your second Starbucks Venti, their post on “Literally, I Can’t” was nothing but gleeful. They chose to describe it as the new anthem for “Basic Girls” or in its original context, the basic bitches, where life is nothing but a We Heart It collage of Chanel wristlets, still images that recall love and dating through the music of Sixpence None the Richer or Taylor Swift, and flashing lights of the big city. I know this world just as well as what fills the childish yet humorous pages of Bossip.com. According to Elite, it’s the “funniest song…in quite some time” and even ended the post with “Enjoy!” So how is it that Huffington Post Women and Elite Daily has two completely different eyes when watching “Literally, I Can’t”. It’s the same video, same lyrics, same Beckys and douchebags. What’s so different? 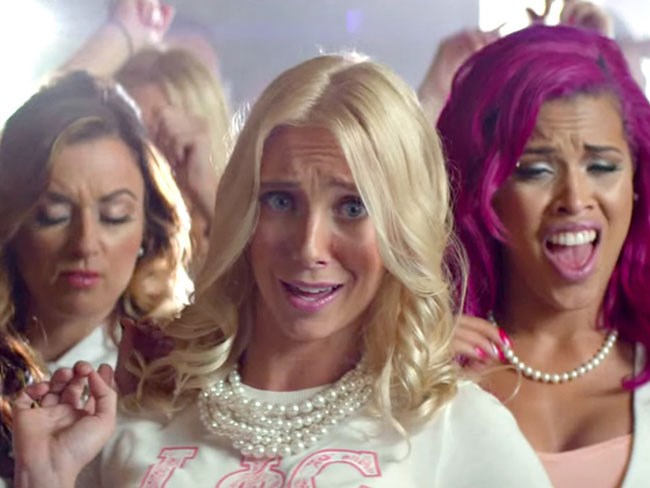 In being a reader of both, here’s how it went. Huffington Post Women hated it from the jump. I’m sure the band title was enough to get the eyes squinting and once they heard the airheaded response of “Literally, I can’t” and “Shut the fuck up!” they saw it as a battle of the sexes in which even when a girl tries to says “no thanks”, it doesn’t matter if she said it as hard cold bitch or a lassie, a guy will resort to selective hearing and behavior because a plot twist has arisen itself. Accusing it of glamourizing rape culture was a bit extreme, but with the university setting and loud exchanges, it was must’ve reminded them of all the news of college sexual assaults and sex crime iissues that’s been in the news much more aggressively since 2013. I see the connection.

Elite Daily on the other hand, they just took the song for what it was: a goofy track about having a good time while fun laughing at Debbie Downers. The sorority valley girls were the culprit. Elite had no interest in taking what Playz-N-Skillz had to say or pop-rap seriously, which might’ve worked in their favor because if that’s the case, they’re giving the song less power in being some pro-rape culture theme song or pro-boys will be assholes sing-along. Still, what Elite probably didn’t see coming was that the comments on their page for “Literally, I Can’t” as were akin to what commentators were saying at Women, the other end of the spectrum.

I’m not sure why they “literally can’t,” considering sorority girls loooove shots, frats and tequila, but I guess that’s where the joke comes into play.

Perception is a tool that will guide you towards evaluating and expressing something or someone has affected you, and in a span of a few hours, it was shown how disparate experiences can be. That maybe this is why battles for equality, solidarity, and common ground can be hard to achieve at times.