A Perspective on Kim Kardashian and Paper Magazine 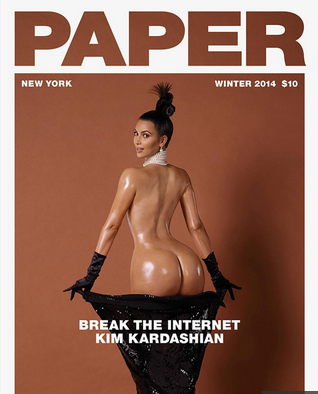 When I first saw Kim Kardashian’s now epic photograph for the downtown New York downtown guide PAPER, my reaction was a mix of shock and exasperation. Not this again. And by this again, I mean: Why was she naked? Why was she placed in such a provocative position (literally and figuratively). Why did they do this?

The picture itself is pretty wild and I didn’t even see the one in which she was clothed in a glittery, black, strapless gown; champagne glass on her butt; posing in what looks to be a highly uncomfortable position; with a half circle of champagne above her head. That shot itself is relatively artistic and outre, but the shot I saw first like everyone else was with her backside entirely exposed, photo-shopped, and unnecessary. Points for the Mikimoto necklace and high society bun, but still…what the hell was this about?

I didn’t necessarily attack Kim for the photos themselves, but I felt disappointed. It came across cheap and uninspired. Like a cheap imitation and semi-parody of a 1970s issue of Playboy. Paper’s direction was all for shock value and I suppose that in itself is an art and always has been because to genuinely incite movements and feelings of jolt is one of the most clever and manipulative ways to stay, and even pause, the membrane. I remember thinking: “Oh Jesus, here we go”. I knew the memes were coming, the insults towards her about being a whore and a bad role model, about her being a mother and the implications of whether she’s allowed to be “sexy” anymore, if Kanye really is her keeper, and so many other conspiracy theories about this woman’s existence as a celebrity. And I’ll be honest with that last bit however. No one, not even the most dedicated pop culture aficionado saw the rise of Kim Kardashian coming. Her business, her wealth, her mere appearance has solidified her an amusement and a nuisance. For someone so marginalized as a lucky in life harlot, her stamp as a modern icon of the media is incontestably a reality. If you get to read how the Amanda Fortini, for Paper, described Kim’s physicality, it was like she was dual time warped into having tea time with Cleopatra.

Unlike most people, she looks exactly the same in person as she does in photographs or on television, with one exception: she is smaller than she appears in images, with tiny, almost doll-like ears and feet and hands. Everything else about her seems amplified, tumescent. Her black hair is thicker than any you have ever seen, her lips fuller, her giant Bambi-eyes larger, their whites whiter, and the lashes that frame them longer. If some of this is the result of artificial enhancement — does anyone else have eyelashes that resemble miniature feather dusters? — none of it seems obviously ersatz. But that’s not to say it looks real, either. She is like a beautiful anime character come to life.

I sat back and watched the marathon of opinions pour in through social media, which was a definite without Paper‘s think they being slick hashtag of #BreakTheInternet. It was later in the day while a friend and I were talking when she informed me that more photos were released in that she “nuder than she was in Playboy”. WHET?

I immediately went to Twitter where I knew it would be. I clicked on the first because WHET? “Nuder than Playboy”? She’s already done nude photos for W and British GQ, and the latter was already the limit, but my friend made it sound like this was the ultimate because you could see her breasts and nether regions. And soon there she was in birthday suit glory, boobs chilling and everythang. My annoyance shifted from Kim to Paper real quick. Paper? You’re doing this now? In the realm as a pop culture analyst and pro-feminist follower, I was PISSED! I felt like she was being exploited for the sake of Paper trying to regain relevance and I’m not here for their desperation.

To thing with Paper is that, they were my first magazine internship,and first internship ever, in New York City. I worked with them, for free, for about 3-4 months, 3 days a week, for the editorial department. I was also an assistant once in a photo shoot, a hostess for their events, and was the wing-woman for the Market Editor for the Aziz Ansari cover shoot “Unhollywood” issue in 2011. It was at first a wonderful time as I had adored Paper as a Bostonian wanting insight from those that knew the downtown, New York way of life best. If I could’ve been around the club kids, I would’ve been a total hangers-on, and I held on to Paper past the early aughts for they were a reminder of the New York City I visited as a child and admired 4 hours away. I did at times find them to be very backside friendly towards celebrity culture, but I did appreciate that they used their space as a chance for people like Kim Kardashian to be artsy and less “on”.

When I saw the full frontal picture, I was pissed because it was truly a sign of changing times for a sector of the media I was so inspired by to become a writer by. Alongside the shelves of novels, it was the magazine industry. Kim might’ve been okay with the shoot because she got to work with the legendary French art director Jean Paul Goude, but I felt like I was reading Paper quite well for other than their vision and words.

Unless you’re in New York and into editorial really passionately, not many people have heard of the magazine. It’s not widely sold unless you go to a huge bookseller like Barnes and Noble. It’s even available for free in parts of Brooklyn, its website does quite well with over a million visits a month, but it’s 1995 or even 2002 anymore. New York, their background, their original muse, is not what it used to be. No one really cares anymore about the art, music, or fashion scenes that’s become so exclusive and haughty in the capital of the world. Paper is obviously trying to stay afloat in what’s also a dying industry in which even major mainstream rags like Vanity Fair and USWeekly are plummeting in sales. The material as far as content has remains reliably good and they have sustained their merit when it comes to discovering talent that has otherwise gone unappreciated to the public. Yet, in exploiting Kim for attention and coverage, yes it’s smart for publicity, but extremely tacky from where their former selves. It’s strange because being provocative is celebrated in the house of Paper and they were true to themselves in how they collaborated with an international artiste, but I don’t know if it’s because of Kim’s sexualized history as a celebrity even when she states she doesn’t want to be known for such and just stunts, or the simple fact that it was highly surprising but the intent behind it was so obvious, and controversial, it oddly fall flat and yet is capable of gawk status at the same time. It’s overall tacky how they used Kim’s body to keep the lights on in their office.

Here’s a side by side of the photo from 1982, based on Goude’s own references and original shoot.

With 2014 coming to a close, Paper‘s Winter Issue seemingly wraps up a year so focused on the female body, whether plus-size, surgically enhanced, the pressure to keep curves, thin-shaming, and Vogue declaring butts as the new favorite and It body part 20 odd years later after Sir Mix-A-Lot “Baby Got Back”, Jennifer Lopez post-Selena, and the era of the video vixen in hip-hop. Kim’s salacious addition to her salacious profile also arrives after the volcanic response to Nicki Minaj’s Anaconda single cover that also fully exposed her butt in a pink g-string. Can this Skinemax stop, or subside at least, in 2015? When are we going to Kanye’s ass for the money shot? Yes, celebrating your sexy with a body gorgeous to the Gods, but I’ve seen some of these backsides in the media than I’ve seen my own. Damn!

My perspective on Kim is that I want to like her as a business woman, which I do, and really not pay any mind to gimmicks like this, but when I saw her latest round of photos, I felt nothing and something in the category of annoyance. Am I silly to think she’s better than this? Maybe to a lot of you I am, but I suppose it’d be interesting to see this overexposed mogul championed for her brains and hustle, and not for her body anymore. I’ve had enough.

Check out an interview Kim K. did that was a discussion of her power, usage, and influence on social media. It’s a setting in which we often don’t see the reality star engaged in.