I love mascara, but I’ve finally, finally, have come to appreciate the magic that are the faux eyelashes! After former and sporadic trial and errors with falsies that nearly left me in irrational tears, I’ve gotten many miles closer to being agile with them. But it wasn’t easy and still isn’t. As a makeup enthusiast (not makeup artist), next to contouring, I was always fascinated by the option of using false eyelashes. Like, how did anyone actually put them on? Even when you knew they were fake, how were they merged with your real ones? Every time I saw a picture of Kim Kardashian’s (everyone’s secret beauty idol) latest red carpet look, after the cheekbones, I zoomed in on her lashes, and I’d be like, “How?”

Since the last time I tried (the crybaby incident), for whatever reason when I saw a pair of Katy Perry for Eylure lashes at Target, and on “Clearance” for $4.98, I bought them and decided to give “Punk Princess” a try.

Completely unfazed by the past and without refreshing myself with a tutorial, I briefly read the Eylure instructions and surged ahead.  I wasn’t where I am now in applying them, but after a much less dramatic attempt than before, I did okay and actually liked what I saw. My lashes were super full and I didn’t feel clownish! I thought, so faux eyelashes can be fun! I instantly felt like I found a brand I could trust and after a few more wears, my return to the eyelash game began.

Since that Eylure purchase, I’ve gone on to try a few other brands that I really like. But first, let me tell you the ones I don’t care for which includes E.L.F. and Kiss. E.L.F. makeup products are awesome and have improved so much in the last couple of years. But their lashes just look and look lackluster. The two things I’ve bought them, I’ve always ended up telling myself, “I knew better.” And Kiss products, they just never did it for me. They’re widely sold at most nationwide drugstores so they’re a common choice for amateurs and local MUAs alike. The last pairs I bought were only because I wanted the applicator it came with which I knew would make it easier to place the lashes. (I now know that I can also use tweezers).

I’ve newly discovered two other brands that I’ll definitely will be wearing and including the London-based Eylure are also Kara and Broadway. Eylure can be found in selected American drugstores and mega-chains like K-Mart and Target and the Perry line is just as good as the main line. Kara and Broadway I found at the neighborhood beauty supply store and I was skeptical at first about both of them. They were very cheap at $1.99 and sometimes with lashes, you just don’t know. I definitely don’t think you have to spend a lot on great lashes (like there’s Velour, where the average pair cost $34), but is is a continuous cycle of hit or miss. 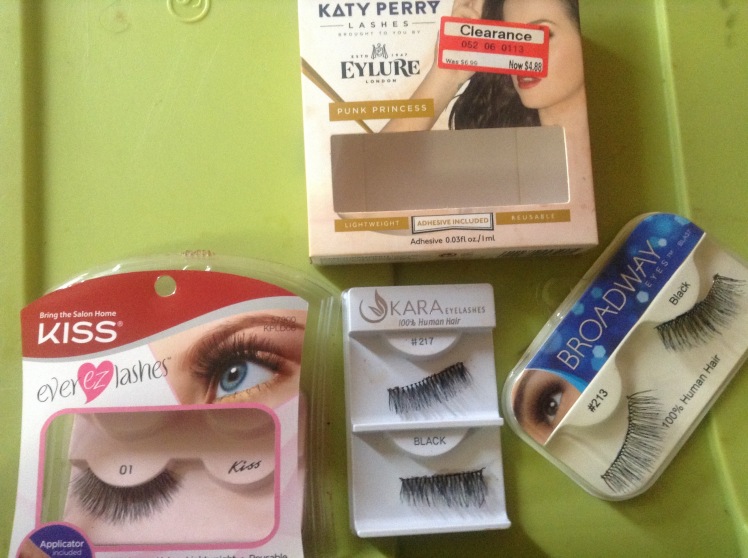 Now let’s talk about lash glue, or adhesives, real quick. The two that I’ve used and worked out so far have been the small tube that came with Eylure’s “Punk Princess” and from that earlier ill-fated attempt, I still also use my i-Envy by Kiss Strip Lash Adhesive with Aloe. Kiss’ adhesives are decent but even though the tube I got was labeled “Clear”, it has yet to appear so. I’m willing to try some others along way. DUO is another popular one. I’ll likely still away from E.L.F. glue however.

Okay, so here’s where I got to keep with real with you. I’ve stated that the application has gotten easier, but struggly moments still occur in getting the lashes to stay where I want them to or placing them just at the curvature at the end of my lash line. You also have to wary of not gluing them too chose to your inner corners (which will definitely make your eyes water). Just the other day, prior to this post, I had to re-glue and re-apply my Broadway #213s five fives before I was appeased and still, it wasn’t good enough. I chose to take them off mid-day, used some makeup remover and instead wore mascara (which was BeneFit’s Roller Lash, topped with Clinique’s High Lengths Mascara. Short review: Roller Lash is a cute concept (“inspired” by hair salon rollers), but doesn’t do anything special to lashes. I found mine to look spiky, which I hate).

The Broadways are a pair I enjoy a lot, so it must’ve been an off day, which will happen with faux eyelashes. You’ve got to be willing to sometimes keep trying until you get “the look” you want. That may depend on your level of patience or how much time you’ve got. It’s also just eyelashes. You may just have to go without that day (unless it’s for a photo shoot. Lashes are so necessary for a photo shoot. That’s whole reason why I gave them a try again. No, I don’t have Allure and Glamour mags on speed dial, but when I shamelessly take a selfie or pictures outside and I’m in them, my lashes disappear).

The fun part: tips! Tips from a girl who isn’t an eyelash expert, but just like you if you’re reading this post, has gained a thing or two about how to make your new obsession with eyelashes look their best. I’ve gotten compliments when I wore the Broadways, so when I got it right, I followed these rules.

When you’re about to place the lashes, try your best to get them right on the lash line, but not on the lash line. You can use your fingers delicately, or an applicator or tweezer to be as precise as possible. You have more of a chance of meshing them with your real ones when they are right on above the lash line but already there were a few times I had the falsies right on my real ones. The falsies looked amazing but I thought “Damn, my poor lashes. They’ve got glue right on them.” It may feel a bit heavy at first too if this happens.

To mesh the fake with your real lashes, afterwards you’ll get an eyelash curler and gently squeeze them together. You can even add a little bit of mascara for extra effect. Some wearers do that in reverse and curl and put mascara on first, but I wouldn’t suggest that. Considering if you don’t like where you’ve placed the lashes or a minor flub happens, it could get messy. And I just think it’s better for your natural lashes. You gonna wreck havoc on them anyway by wearing falsies.

You can definitely draw on eyeliner and do an extended cat-eye, but depending on your look or how aligned the lashes are, you don’t always have to (you may if at all, need or use a little bit).

Once you’re done with your makeup or lashes, you’ll notice if you gently touch them that they are really glued on and secure. Taking them off is another thing. It may hurt a bit. Not badly, but you will cringe if just with your finger, you slowly pull them off. Your eyelid will stretch, honey. It’s a little aggressive, but it’s okay. Another tip to remove them is to use eye makeup remover or oil on a Q-tip, as beauty blogger Emily Noel recommended on YouTube. I use coconut oil to help break down the glue’s contents. For the latter tip, you’ll still have to pull a bit on the lashes, but it won’t feel as intrusive. You can also wipe clean the band of the falsies with the oil or remover for future use.

All in all, in a growing bin of lashes, they are super fun to wear and once you’ve applied them impeccably, you will undoubtedly feel like a star. Bloggers and those that are expert-like at them, act as if they are so easy to apply, but it’s kind of a cat and mouse game with the lashes and your dexterity. If you want to try and wear them, don’t give up! Remember my crying episode? I was there, it was whack and I tried again months later. And there are tons of types to choose from. And let me say that just because I can’t stand Kiss lashes, doesn’t mean you won’t like them. They even sale individual lashes (a bit tougher to apply) and now bottom lashes are getting some attention (I wanna try those). From supremely dramatic to wispy and light, wear some falsies and demand the spotlight (and take a lot of pictures). 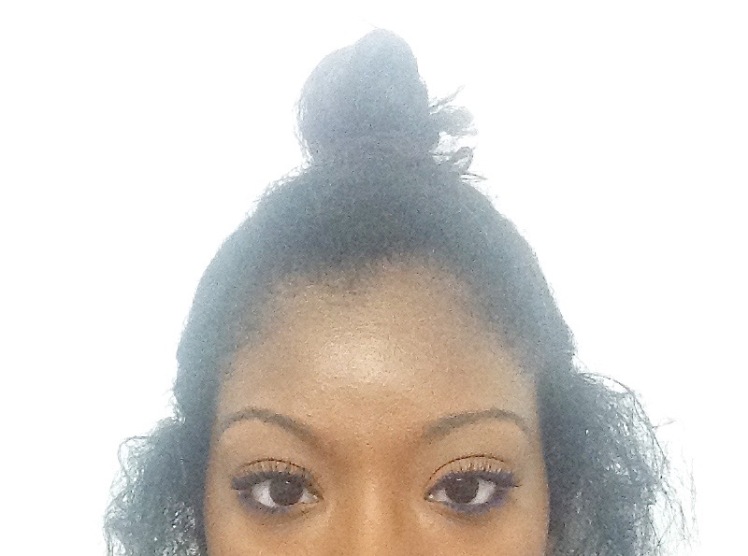 One thought on “The Realest 101 Guide To Applying False Eyelashes”