Rolling Stone magazine’s November 2014 cover article “A Rape On Campus” was meant to be a blistering expose on what happened to female student Jackie who was reportedly gang raped by UVA frat jerks. Yet as soon as the piece became available, accusations of false information lunged at RS and its writer Sabrina Erderly. The months following led to a back and forth discourse of what was the truth and what was propaganda, as the victim herself (Jackie) barely spoke to the media about her ordeal. As of April 2015, Stone chose to finally retract the piece and published an “independent report” with help from the Columbia University School of Journalism to not only save face but to get to the bottom of what went wrong with the details and confessionals in the first place. Rolling Stone has tackled difficult topics since its inception, despite the glossy celebrity images that grace their covers. But “A Rape On Campus” was one of their biggest journalistic mishaps ever. It was also one of the many times in 2014 and into 2015 that the matter of rape and sexual assault was in bold print across headlines, or was used as a gimmick on entertainment grounds. Feminist journalists even coined the term “rape culture” to show just how desensitized and normalized the act had scarily become in both the news and pop culture media.

Towards the end of 2014, I had researched and compiled a list of the number of times “rape culture” infiltrated everything from our drinks at the bar to shocking celebrity news. I for one was pissed about the high occurrence of it. I was disgusted with TV writers that used it as shock value for a character or turning point (cue in: HBO’s Game of Thrones) to feeling anger and hurt for the victims that felt their voices were muffled when they bravely spoke up against the violence they encountered. Hence the way the 40+ women that have come forward about the rapes and attempted assaults they experienced at the hands of fallen comedian Bill Cosby have continuously been doubted or used as jokes.

For the film festival documentary The Hunting Ground, that delved closer into the matter of sexual assault on college campuses especially, Lady Gaga teamed up with award-winning songwriter Diane Warren to co-pen the song for the film “Til It Happens To You.” During her December 2014 interview with Howard Stern, Gaga disclosed that she too had been raped by a record producer when she was 19. This year, Madonna sadly admitted the reality of the emotional aftermath of being raped, also to Howard Stern, when she didn’t report to the police when it happened to her. She was assaulted atop a New York City roof her first year in the city. She said: “You’ve already been violated. It’s just not worth it. It’s too much humiliation.” Madge went into further detail back in 2013 for her Harper’s Bazaar cover story about the incident, in a letter to her younger self. (But as much as we love Madonna, please don’t follow her decision to not report cases like these. As discouraging as the media makes it seem to go to the police, go to the authorities and tell somebody you trust to help).

In the video for “Til It Happens To You”, directed by Catherine Hardwicke (she also directed the first Twilight film), Gaga is nowhere to be found, but there are three instances of sexual assault and rape shown featuring four characters, including a seemingly in transition young woman. Shot in muted black and white, the scenes are graphic but the clip goes beyond just the barbarian actions of the culprits. It doesn’t expose the consequences of the rapists, but does instead shine a light on how the victims become survivors, combating a momentarily lessened self-worth through a support system of friends and family.

Musically, it is piano-based and the lyrics are honest:

The lyrics also challenge head on that the journey to feeling like yourself again is not easy at all from the perspective of the survivor of sexual assault. And this is true for anyone that has experienced or knows someone who has gone through abuse physically, mentally, emotionally or sexually. The video and song, in conjunction to The Hunting Ground, is also in partnership with the Obama Administration’s It’s On Us campaign, an effort against sexual (and domestic) abuse.

.@diane_warren & I made "Til It Happens To You" for people all over the world who suffer from painful life experiences. #TheHuntingGround

The video may be hard to watch for some and it may even bring about tears. Comments online have responded positively to the video, with personal testimonies written. Visually, the video reminded me of Christina Aguilera‘s “Beautiful”, but is a little darker. I will note that both videos, include a Black woman, but both parts are played by lighter-skinned women. I couldn’t help but think if the off-and-on celebrated trope of “the strong Black woman” prevents the reality that Black women of all shades suffer from abuse from being shown. All women of color need the services of mending a broken heart and the rebuilding of self-esteem. Let’s not act if they’re pain does not exist.

Below is the video of “Til It Happens To You”. Watch it and please be mindful of those that have suffered such hard times and that it is indeed on us to be on their side.

A proceed of digital sales will benefit organizations that victims of abuse. 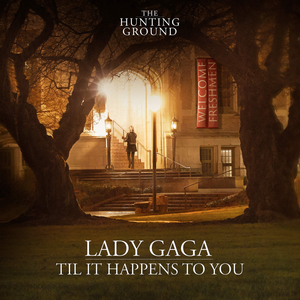