Pumpkin Spice Everything Has Every Intention Of Taking Over Your Life Amongst the return of college students and adorable orange leaves, like clockwork this past September,  I knew that the return of pumpkin spice as upon us and I instantly experienced some mild trepidation that going to the grocery store would still be a necessity for the fall and winter. Last year, pumpkin spice flavored drinks at coffee shops became such huge money-makers, the taste had influenced pumpkin spice Milano cookies by Pepperidge Farm to other unforeseen “seasonal” treats such as Wrigley’s Extra sugar-free gum. It gradually took over the food and beverage market in the mainstream. Per Forbes.com, in 2013, “sales of pumpkin spice-flavored products rose 14% to nearly $350 million in U.S. retail outlets” and “Nielsen [reported] that 70% of pumpkin spice sales occur between September and November.”

If you can believe, I’ve only had a sip of what started the pumpkin spice craze, Starbucks’ original Pumpkin Spice Latte (now abbreviated as “PSL.”) Even the Dunkin Donuts version I have yet to give into. But I’ve always been open to trying out the many variations of the zest for the fun of it. But unfortunately, I’ve been left more unimpressed than instant transition into a fan-girl by most of the pumpkin spice food items available. Like that Extra gum was okay but I wouldn’t buy it again. And Trader Joe’s, my beloved grocery spot for when I’m feeling rich and organic, their Pumpkin Cheesecake was such a disappointment. The smell was near acrid and the taste is not far off from being described just the same. (Their regular New York style Cheesecake, however is the ultimate in dessert comfort food). The pumpkin donuts at Dunkin’ Donuts were tolerable, but they are heavy. (Don’t get more than one!) But I do relish a pumpkin beer over traditional hard liquor.

So while generally I’m neither aggressively here or there with the pumpkin spice trend, I do however feel that because the flavor is often artificially reproduced, the taste transpires as quite wooden to the taste buds. Pumpkin spice of course can be wonderfully sapid, converging everything great about the fall. On the flip side of being too manufactured, that pumpkin spice life secretly gives way to wanting to go back to that mint cocoa mindset (Hello, Andes candies…) During one of my most recent visits to the grocery store proved otherwise that whether those foods from last year tasted good or bad, pumpkin spice was back and it has come with even more friends than before. (A buddy I won’t be inviting over again anytime soon are those pumpkin spice Frosted Mini-Wheats. Stick with the regular. They’re still on the kitchen counter and that never happens in my house when it comes to Mini-Wheats). At my local Stop & Shop, pumpkin spice had besieged the aisles. My tupperware and snacks be damned! The first sign of the times was an entire display of pumpkin spice everything from Jell-O to baking mix. I was like, “Oh, no…!”

#PumpkinSpice Ready and able to take over your life this fall and winter. 🎃 🍂🍃 pic.twitter.com/qr2nuzlPqP

As I kept going through the aisles, the supersaturation of the flavor got more apparent. After the display of pumpkin spice Oreos, innocently awaiting me by the granola bars, (that much I saw coming. Oreos have been making limited edition cookies out of everything. Underneath were Toasted Coconut), then came the avalanche of PUMPKIN PASTA SAUCE. 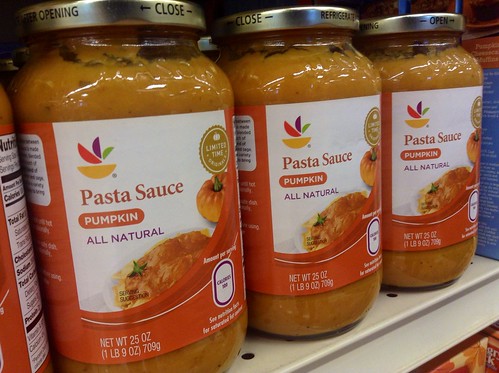 Funny, the sauce was actually on display with the first group of pumpkin spice products, but I was so overwhelmed, I hadn’t noticed. Pumpkin sauce is actually not that out of ordinary in yummy pasta world, but something about the presentation of was clearly catering to the spice phenomenon. And how would it even taste? Pumpkin sauce is a toss-up and as much as I love Stop & Shop and I’ve bought their generic products before, again, if this sauce like this is made too cheap, it could be a disaster atop of your farfelle. But I believe that pumpkin sauce could work great with food and spaghetti. That kind of heightened mix of savory could definitely make the mouth water! But seeing hundreds on display like that had me shook! Has pumpkin spice officially gotten out of hand? What could possibly be next? Milk? Chips? Pumpkin spice infused lettuce? The trend has gotten gimmick-y, you can easily find at your local drugstore, Food Lion or Publix, pumpkin spice M&Ms, Country Crock butter, Philadelphia cream cheese and energy bars. Certain food items make sense like anything dairy or sweet, but, PSL has “inspired” everything!

This year, along with the overabundance of pumpkin spice, the initiation of “make it stop” pleas via articles online have also sprouted. Over at Yahoo! Health, a cautionary breakdown of the original latte was posted, making it a quick rudimentary fact that the average PSL contains: “2 percent milk and topped with whipped cream, contains 380 calories, 14 grams of fat, and 50 grams of sugar.”

And this piece was not playing. The writer, Korin Miller, included a co-sign from New York nutritionist Jessica Cording in that PSL’s effect on the brain is the equivalent of being on drugs like cocaine because the body has potential to become addicted to the copious amount of sugar intake. Oh?

It also stated that within 20 minutes of devouring that delicious PSL (Starbucks also announced that this year would be the first to include “real” pumpkin. Like when KFC or McDonald’s declared they were going to start using “real” chicken) your pancreas reacts like a gerbil on a wheel, kickstarting other high-strung aftereffects the body has to pumpkin spice. (But there are 14 grams of protein!)

But the kids today want their PSLs. Over at Tumblr, they are pages dedicated to it and the photos are subtly genius and hilarious. Death by Pumpkin Spice continuously collects and posts pictures of every and any pumpkin spice food product you can find. And you know how earlier in this post I jokingly mentioned PS chips? Yeah, just look below. (Thanks again, Stop & Shop).

Because Pumpkin Spice has become so frighteningly ubiquitous, I feel even less obliged to try the latte this year than the last. And as nerve-racking as it was to see what else might’ve contacted the frenzy, it has been comical to witness. The new FOX series Scream Queens in their pilot episode featured a minutes-long diatribe from character Chanel Oberlin berating a barista on getting her PSL just right.

The questionable popularity of PS also brings to mind the underrated greatness of other seminal fall fixes like apple cider. It’s ver similar to the flavor o pumpkin spice. And have you tried an apple cider donut? They’re usually available at farmer market-like spaces and they are so delicious. The perfect balance of sugar and spice. I also tried this year an apple cider slushie. *grabs chest. concurrently dreams of one*

I later became notified of Fire Cider too, an unfiltered apple cider vinegar. It sounds intense, maybe even gross to some, but people have drunk it and made it out alive, and it’s sometimes included it as an ingredient in cocktails and for ailing burgeoning colds. It is traditionally taken in the morning.

Lest, my personal vice, pumpkin pie. Note: if you ever see me eating sweet potato pie, it’s because pumpkin was nowhere to found.

By all means, if you’re so excited and just can’t hide your love for pumpkin spice, carry on as we all have some type of foodie obsession. Just also have some fun in seeing how ridiculous the trend has gotten (even Wawa road trip stops on the highway has got them) and slow your roll if you are a have one every other day type. (I know it’s an effort. I went through a hot chocolate every day phase too). You want to enjoy the pumpkin spice. Not deify the pumpkin spice.