Cindy Crawford has been epic in the field of modeling since her rise began in the late 1980s. The Illinois native, with the unforgettable mole on the right side of her mouth, has returned with the release of her book Becoming, a retrospective of her modest former life and dazzling career. And for you Snapchat kids, she also played the “Headmistress” in Taylor Swift‘s VMA-winning “Bad Blood” video.

Crawford was crowned a “Supermodel” in the ’90s and remains one of the most recognizable faces of the era. She was on the cover of magazines of the higher echelon like VOGUE, edgy, like the short-lived, Kennedy-backed George and long-standing Cosmopolitan. She bravely posed for Playboy magazine at a surprising five times. Hosted MTV’s House of Style and was a spokesmodel for Revlon. She was also featured in a solo, steamy bathtub scene for George Michael‘s model-lead “Freedom ’90” video that turned 25 years old in 2015. Crawford is a fashion legend.

Becoming was released late September and is published by famed outre publishing house Rizzoli. But this isn’t Crawford’s first foray into books. In 1996, a year after being named Forbes‘ top-paid model in the world, she co-wrote with makeup artist Sonia Kashuk and Kathleen Boyes, the makeup how-to Cindy Crawford’s Basic Face. Like the title suggested, it was not a glamor guide on how to create bad-ass smokey eyes or rainbow looks that a New York City club kid would’ve rocked. It was an ode to how makeup and cosmetics should enhance your face, not cover it. In using the book as a nostalgic reference, it is interesting to observe how 19 years later, makeup is such a force in business and personal passions. One could argue that its influence is even larger now than when Crawford was walking those Versace runways next to Naomi Campbell. But this was a topic that Crawford knew well from getting her makeup done for photo shoots and backstage during fashion week. 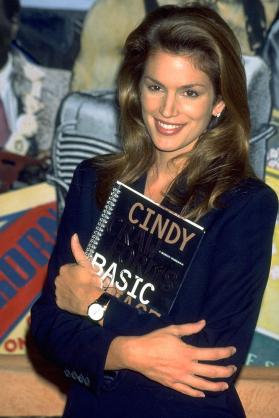 While taking in Crawford’s, Kashuk’s, and Boyes’ advice, the most obvious matter of opinion between then and now is that they really opposed tricks like contouring and dark makeup for the everyday girl and her likely customary lifestyle. Like on page 62 of the binder-style book, it was suggested that “Contouring is for cameras. In real life, the point of blush is to add color to the face, not to reshape it.” Cosmetics-wise, we are still in the time of mastering the contour and the highlight, so reflecting upon the ’90s mantra of less contour(ing) is better kind of makes you rethink that not knowing how to sculpt your cheeks to chiseled dreams is more than okay. You’re not any less of a makeup geek.

Basic Face was really a beginner’s guide. But even for I who believes I know a lot about beauty (my growth is like the Barbie meme you see on Instagram), I liked being reminded that when it comes to textures and formulas, to make sure your products are two of the same, like foundation and blush for example. “Cream to cream, powder to powder (pg. 62).” Sound advice because it makes for the overall result more seamless. I do tend to mix up formulations, but often based on the color I feel like using that day. 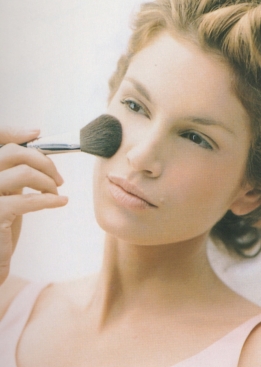 Basic Face emphasized wanting to celebrate your natural beauty so much–“The objective is to achieve a gentle [overall] glow (pg. 65)– it didn’t even want you bothering with blushes in “orange, carnation pink, or eggplant” because “Nobody blushes” in those hues. The tips Basic Face gave were extremely practical, but it did feel like they were killing the fun in not wanting us to think outside the box of colors. Today, some of the best blush shades could be described as those above such as Sephora’s Colorful Cheek Ink Gel in “Lotus.” (Basic Face recommends sticking to “pink-browns, apricot-browns, and red-browns.”)

Nevertheless, the bigger angle of Basic Face was that it was important to perfect the artistry of makeup before moving on to wearing louder shades or more graphic, detailed designs, like a cat-eye. Such a term is not even mentioned once in Basic Face. The closest to a cat-eye description was this: “Unless. you’re going for a vamp look, you don’t need liquid liner (pg. 77).” We’ve all reached for a liquid or pen marker for that “vampy” eye look. But as someone from the inside of the fabulous life, Crawford back then was reassuring her fans that the looks they saw on the runway or in Mademoiselle weren’t necessarily meant for wearing while doing your errands. And let’s think about this for a second…who was really rocking a cat-eye back in 1996? (Marilyn Manson doesn’t count. He was on another level of makeup usage). I don’t think I saw the now staple eyeliner style become omnipresent until about four years ago! On page 77, it was insisted that “lines should be undetectable” and essentially blended into the lashline (of course) but also shadow. In 2015, many makeup lovers crave crisp, distinct eyeliner lines.

For eyebrows, Crawford & Co. were fond of them being strong and defined and Crawford admitted that “Lipstick is the one thing I sometimes get trendy about (pg. 86).” She also called on using “powder or sheer foundation” as a base for lip products. And that to: “fill entire lips by blending in from the edges. Pencils are drier [and] they last longer than anything you put on top of them. If you only outline the lips, within an hour or so all you’ll have life is the line (pg. 95).” So that’s why we sometimes get that odd look once the lipstick has faded!

A lot of tried and true tactics are contained in Cindy Crawford’s Basic Face (NOTE: if published today, I can guarantee that it would not have been titled that either. The word “basic” is a damn near diss in social media vernacular), like blotting your lipstick with tissue or sticking your forefinger in your mouth to remove excess (yes, both tips work). And how dark colors “make an area recede; light ones make an area come forward” (pg. 77). Crawford just wanted the world to see you! Wear makeup, have fun with it, but always be aware of how everything works altogether. Crawford offered tons of sisterly advice too for a better sense of self-esteem and your emotional connection to makeup. Some gems to add to your makeup counter include:

“Makeup is a matter of perspective. Step away from the mirror and see the view most people will have of you throughout the day (pg. 96).”

“Don’t worry about the negative. If you like your eyes, but not your lips, put your energy into making your eyes up so that they draw the attention and keep your lips neutral. Or if you like your lips, wear a pale face and a bright lipstick. By playing up what you feel about, you play down what you don’t (pg. 19).”

OTHER TIPS TO REMEMBER:

“Since eye pencil is cream, it must be set with powder. Otherwise, you risk unattractive creases or uneven fading (pg. 77).”

“If you don’t wear mascara, you need to remove the powder that has fallen on lashes, just take vaseline or clear lip gloss and massage unto lashes. This will remove powder traces and leave lashes with an attractive sheen (pg. 81).”