ColourPop is the cute, spunky makeup brand that self-promoted itself in early 2015 and by September had impressively gained one million followers. Their success is an absolute matter of (great) word of mouth reviews and their unexpectedly cheap price points. $5 for a lipstick?! Within the lipstick landscape that features $90 tubes by Christian Louboutin and the slightly more accessible luxury of Tom Ford‘s $49 ones, ColourPop is adored for its reasonable business outlook on makeup and of course, its fun colors!

For its Fall 2015 collection, they released a line of new eye shadows, blushes and “lippies” all with tribute names to the 1990s (and late ’80s). The colors range from mauve-browns to hypercolor fruit shades, the names are the most awesome part of owning these. But where do the references comes from? I know for some you “90s babies” you may know about “grunge”, but what about “Contempo”? Let this ’90s child school you now. #CLASSISINSESSION

“Oh snap!” was a phrase used primarily during the ’90s as a way to show excitement about anything! And this excitement was usually on the edge of being surprised, like hearing about a flash sale at the mall or The Cranberries dropping a new single. “Oh snap!” was re-introduced in the 2001 comedy Legally Blonde through the “bend and snap!” move.

Major points to ColourPop for recognizing the one-time mega store for young adult women and teens in the ’90s, Contempo Casuals. It was a mall staple that for younger generations was the earlier version of say a Charlotte Russe, NastyGal.com or even Forever 21. Trendy, cute clothes at great prices. Contempo was featured in the 1995 film Clueless and it was implied that it was Cher and Dionne’s favorite shop for mini backpacks and big ass top hats. It was bought by the Neiman Marcus Group in 2001 and converted into Wet Seal. #CONTEMPOCASUALSFOREVER 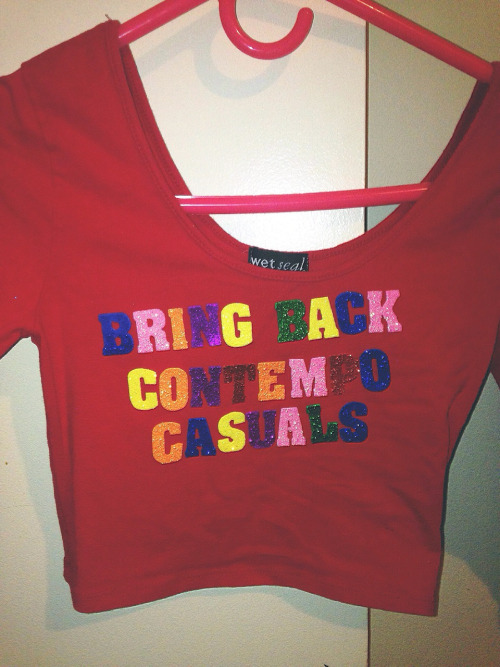 You probably already know this one. “Grunge” was the nickname of a music movement and sense of style in the ’90s. Musically, it was (basically) alternative music and the label was stickered on to bands like Nirvana, Soundgarden and Pearl Jam to their complete dismay. Grunge also inspired the infamous 1992 Perry Ellis runway show. Then, Marc Jacobs was the creative director and while press coverage, for the intended 1993 spring and summer lineup, was enviable (everybody talked about how Jacobs got supermodels like Naomi Campbell to wear a slouchy beanie) he was fired for his little bit too youthful impressions on the sporty label. Grunge lives on in our perpetual ’90s nostalgia and of course, Urban Outfitters. And then Perry Ellis became borderline iconic in the following years.

“That girl is poisonnnnnnnn!” The song by three former New Edition members, Bell Bev Divoe, (#BOSTONSTANDUP) still gets any party poppin’ as this was their one huge hit back in 1990. “That’s why it’s hard for me to find…”

Dazed and Confused is one of the seminal films of ’90s and especially the era of the independent filmmaker. Released in 1993, but taken place in 1976 on the last day of high school for its characters, actors in the film like Ben Affleck, Matthew McConaughey and Milla Jovovich went on to bigger fame afterwards. This stoner comedy from Richard Linklater also formerly shared a name with the still printing and influential UK fashion magazine, Dazed & Confused, that is now just called Dazed.

You’re going to go straight to the principal’s office if you don’t know this one. But hey, let’s write a blurb about it anyway! Nevermind is the name of Nirvana‘s 1991 album and it still holds its place as one of the great, defining LPs of the decade.

A few years back, VH1 aired a special called When Supermodels Ruled the World and they were right about that time frame of the late 80s to early 2000s, when models were as famous and with huge fanbases as movie stars like Julia Roberts and Tom Cruise. It was everything when Cindy Crawford, Stephanie Seymour and Helena Christensen walked the runways of Versace and Calvin Klein. And at one point, Naomi Campbell, Linda Evangelista and Christy Turlington were stamped “the Trinity” as Evangelista allegedly declared that she didn’t get out of her bed for less than a $10,000 paycheck.  The supermodel era was a moment in fashion, and as these women and more became the face of glamour, and sometimes controversy a la Kate Moss, RuPaul released a parody, fun track called “Supermodel” that became a huge dance hit in 1993. Models were even taking over music videos. Check out the clip for George Michael‘s “Freedom ’90” as the ultimate example.

This is likely the only product out of this collection that may have had you stumped because of its name. But yes, “I Spy” in regards to the decade, means something! I Spy: A Book of Picture Riddles is the name of a children’s book published in 1992 that challenged young minds to think about places, objects and the environment and how they worked. It was a mainstay at any elementary library and during reading time!

As a phrase, “girl power” still rules as the all encompassing plea for women everywhere to believe and be themselves! Immortalized by the Spice Girls since 1996, today “girl power” can be seen through the passionate campaigns of #GIRLBOSS by NastyGal’s Sophia Amoruso, “Girls Can” from CoverGirl, Let Girls Learn initiated by First Lady Michelle Obama, and #Like a Girl by toiletries brand Always.

Boy bands really came into the popular culture lexicon by 1997 when Hanson blew up with “MMMBop” and later through Backstreet Boys and ‘N Sync. Boy bands had a moment in the late ’80s and early ’90s, like with New Kids on the Block and New Edition, but by 2000, the wave was serious as while some came and went from American MTV like 5ive (remember them) and BBMak, the aforementioned are beloved icons of ’90s pop music.

Mixtapes were the greatest gift you could get in the ’90s and sometimes you even made one your damn self to jam to. True ’90s kids remember sitting by the radio or boombox and waiting for their favorite song come on and hit “record” so that cassette tape could get it. Mixtapes then evolved into mix(ed) CDs through the beginning stages of downloading music (hi Limewire) and now in 2015, we have the streaming playlist. But we’ll always remember the treasured physical mix tape of your childhood. #TEARS

The pattern of plaid may be the most symbolic fashion print of the decade. While the color scheme doesn’t really matter, a classic red, black and blue, or green, are the truest tributes you can give to the era if you choose to go tartan. #ROCKONPLAID

This one is actually a reference to the 1989 film Say Anything in which John Cusack‘s character Lloyd plays Peter Gabriel’s “In Your Eyes” in front of Diane‘s (played by Ione Syke) house. You’ve seen the famous image of Lloyd with a boombox above his head, determined to prove his young love to her. It’s a classic 1980s film moment and was Cameron Crowe‘s directorial debut.

For all ten seasons, the friends of Friends gathered at Central Perk, their favorite coffee shop in Manhattan. For its 20th anniversary, a real Central Perk pop-up shop was created for fans to frolic and feel like Monica, Rachel, Phoebe, Joey, Chandler and Ross.

Another catchphrase of the day, you would say “straight trippin'” if someone was acting up, whether intentionally or not. It was the ’90s version of saying to someone “you tried it.”

This one is named after the 1999 romantic comedy Never Been Kissed starring Drew Barrymore. Playing Josie Geller, aka Josie Grossie, a former nerd who returns to her high school as an undercover student, she finally gets her first real kiss through the experience! It was an adorable and film and you’ll see a not super famous yet Jessica Alba in the film playing a catty popular girl.

The 1999 devilish dark comedy (or was it a drama) Cruel Intentions was the original Gossip Girl. Playing bitchy brats of New York City’s upper crust, Sarah Michelle Gellar went bad-ass as the emotionally corrupt Kathryn, the bad boy with a secret conscious side and stepbrother to Kathryn was casted through golden curly-haired Ryan Phillippe, and at the core of their evil plans was the innocent Annette, bodied by Reese Witherspoon. One of the epic teen films of the year, there have been sequels since, but none compare to the first.

3 thoughts on “#Flashback: All The Pop Culture References From ColourPop’s Fall 2015 ’90s Collection”