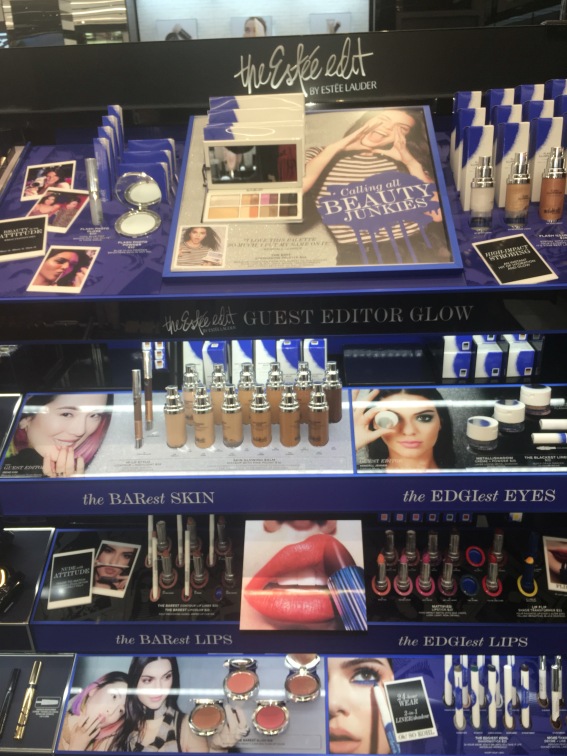 The Estee Edit is legendary makeup brand Estee Lauder‘s newest initiative towards appealing to beauty-loving millennial consumers. The roll-out officially began several weeks ago with their Instagram and Twitter pages, alongside the hashtag #beautyattitudes. The label also prettily magnified the It girl lifestyle in their ads featuring Irene Kim, a Seattle-born, Korea living fashion influencer. And Kendall Jenner, who may not need an introduction because she’s a part of that famous family. (Though her modeling career has been impressive. She can certainly smize like the rent is due). Since already a spokesmodel for Estee Lauder, Jenner was a natural choice for Edit. It also can’t hurt that she has “68 million” followers “and counting” on social media, according to her special edition issue of American VOGUE.

After being available on Sephora.com for about a month, The Edit’s line made its debut in U.S. and Canadian Sephora stores this week. (It’s sold exclusively through the chain). It wasn’t confirmed whether Boston’s Prudential Center would carry the line. But I had taken a liking to the products online, so I was hopeful it would be available. Sometimes Boston gets left out of the fun in major makeup and fashion launches. As much as I love New York City, it would be nice for a change to not be on the Lucky Star or Bolt because of my impulsive “got to have it” tendencies with cosmetics. (Yes I did go to the Sephora in Brooklyn’s Borough Hall to check out the Parisian, women of color label BlackUp).

How I found The Estee Edit was by pure guess when I stepped into Sephora yesterday. I perused Josie Maran’s argan heaven and it crossed my mind that maybe, just maybe, Boston would at least have the skincare part. I turned around and “speak it into existence” worked! Right in front of me and against the wall was The Estee Edit for face and body.

The packaging I love from The Estee Edit. It’s mainly white with paint splatters of navy blue and chrome-like silver for lids and caps. It’s fashionable yet fun. I dig it.

The prices for skincare range from $15 for makeup remover wipes to $50 for either an Overnight Water Pack, Beam Team Hydrate + Glow or Rescue Balm. 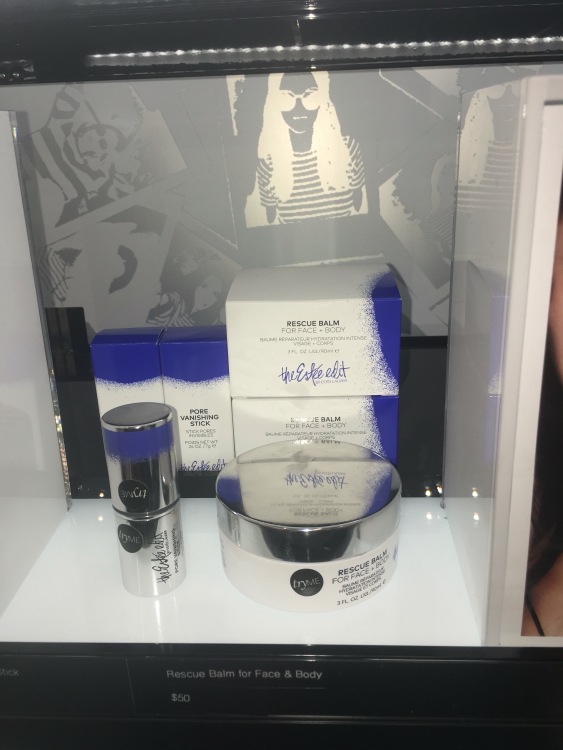 The Rescue Balm felt lush, fresh, and is relatively thick. Due to being for the face and body, at a price point of $50, I wish the jar was bigger. I could finish this in a month’s time. Maybe I’m exaggerating since I don’t own it yet but Estee Lauder may want to consider making it the same size as Soap & Glory‘s Buttercreams in the future. 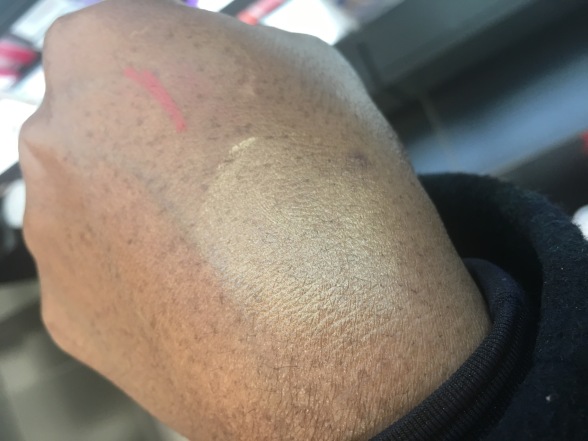 The two photos you passed are a non-flash and flash comparison of the Beam Team. It’s a luminizing cream meant to mix with your moisturizer or lotion. By itself, it’s understated glam to highlight wherever you want and all tubes come with the beam in solid form within the cap.

El Desperado, aka me, went back to the makeup section to see if the color counterpart of The Estee Edit was there. It was! I don’t know how I missed it earlier. I almost always go to the makeup first.

In person, the makeup is attractive and I wanted it all. I was especially curious about Edit’s version of foundation, the Skin Glowing Balm. It contains pink peony which according to ancient Chinese medicine practices, has anti-inflammatory benefits. I swatched a few shades and the texture just glided on. “Clove” was quite seamless on me. I love that browns are included in the Balms. #BrownGirlFriendly

On my hand are mixed swatches of Mink, Clove, and Truffle.

Right below the Balms are swatches of selected Mattified Lipsticks, the Edgiest Kohl Shadow sticks, and The Blackest Liner. The bottom two are the Turn Down (black) and Turn Up (yellow) Flip lipsticks that darken or lighten already applied lip color. The Mattified lipsticks are not drying, streaky, or drag. And the colors are vibrant! “Storm” could be a cult shade for the brand. It’s a forest green meets turquoise hue and is shockingly flattering. A brown-skinned employee in the store was wearing it and damn near looked natural on her.

There’s another lipstick collection called The Barest, which are all nudes from peachy, to beige, to chocolate. I was already loving “Nude Scene”, the darkest nude since The Edit was available online. The Barest also have matching lip liners (sold separately). There is a soapy smell to them but I don’t find it bothersome. They are glossier than the Mattifieds.

The single eyeshadows are the elaborately named Metallishadow Creme + Powder. Their Vaseline consistency, you can finish off with shimmer. The eyeshadow palette is “inspired by their guest editor” Jenner. The colors are standard and isn’t an Urban Decay Naked, but with layering is decent. Some vloggers commented that the texture could’ve been smoother. What does, however, give the palette a unique bend is that it contains Black Light technology. Meaning, the shadows glow in the dark. (So where was this when I was 24 and living my life at Le Bain and Avenue in Manhattan??)

I don’t have pictures of the other items, but also included in the makeup line are: a highlight and contour double-ended stick (“Hi-Lo Stylo”) that is easy to use. Flash Photo Powder and Lip Gloss (apparently, the gloss will make your teeth look whiter in photos. Normally, such claims are bullshit, but this one People StyleWatch assistant said it delivered). There’s also semi-chunky eyebrow pencils, Flash Illuminator liquid highlighters, but let me tell you something. The Barest Blushes are so amazing. The shade “Ember Glow” is hands down one of the best blushes I’ve ever tried. This color is a muted yet darkened pink based peach with added gold flecks.

The makeup prices on average are $22-24 for each item, with the pink peony foundation balm at $36. Again, to some that may be pricey, and I agree, but The Estee Edit is quality makeup. I bought the “Nude Scene” lipstick and the Edgiest Up & Out Mascara. I have every intention of getting “Ember Glow” and “Clove” is calling me.

It would be accurate to conclude that I fan-girled over The Estee Edit.This older millennial has pre-approved it for you.

One thought on “THE GLAM DOWN: Brand New Makeup Line, The Estee Edit, Is So Good!”