“Can we get much higher? So high…” “Dark Fantasy”, Kanye West

Today it was excitedly announced that Copeland will officially be an American Ballet Theater principal dancer, and she is the first Black ballerina to earn the prestigious honor. The Missouri-born, California-raised talent has been working with ABT for the last fourteen years (eight years as a company soloist) and she had already made history as their first Black ballerina, playing Odette/Odile, in a stage production of Swan Lake just six days before.

It’s such thrilling news for a woman who aspired to perform in ballet once she caught the cou-de-pied bug. And along her journey has strived to encourage other women of color to go for careers in fields that are not known to be filled with them or loudly acknowledged by the Black community. She has also publicly stated all the odds that were held against her, but didn’t keep her down, such as her and her mom surviving on welfare and beginning her ballerina training at thirteen years old, an age deemed “old” by ballet standards.

As The Hollywood Reporter pointed out, Copeland “has become increasingly famous over the past several years, achieving a pop culture status that’s extremely rare for a ballet dancer.” It’s true. Pop culture may not be able to recall the last time a ballet dancer was an actual celebrity outside of the Lincoln Center–and no…Black Swan doesn’t count! And speaking of referencing the famed New York home of traditional dance, Hollywood also made note of the “diverse audience Copeland [has] drawn to the Metropolitan Opera House, where ABT [is performing] its spring season. The crowd [this year has been] filled with young black girls in their party dresses.” A clear compliment of Misty Copeland’s historic presence.

Social media exploded with the news as fans posted photos of the 32-year-old (and reportedly, only five foot two) in all her exquisite glory with words of congratulations!

Damian Woetzel, a former principal dancer himself for the New York City Ballet and current director of the Vail International Dance Festival, released a statement via email about the groundbreaking achievement: “In the racially underrepresented world of ballet, Misty has already had a historic impact. Now, as a groundbreaking principal dancer, she will continue to inspire and make possible much-needed changes for our field and for the arts in America.”

Certifying her iconic status, Copeland has released a memoir titled Life in Motion: An Unlikely Ballerina, is currently a spokesmodel for (the athletic brand) Under Amour and Dr. Pepper, selected as one of TIME Magazine’s 100 Most Influential People in 2015, and was chosen to perform on stage with the legend Prince during concerts at New York’s Madison Square Garden, and New Jersey, for his track “The Beautiful Ones.” 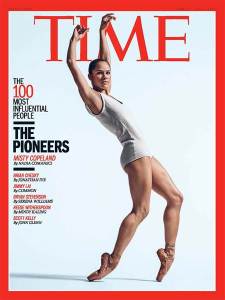 It is so encouraging to know that in a world or cultural landscape that allows “Instagram hoes” to constantly win, women like Copeland are really the ones wearing the crown.

*click on the hyperlinks above to learn more about her journey and a little ballet history!