Why Selena Quintanilla-Perez’s Makeup Was So Epic

Selena Quintanilla-Perez‘s makeup game was simple yet so fierce. By the time she and her family led band, Selena y Los Dinos, arrived on the Tejano music scene in 1990, her “look” was solidified even if the Texas-born, Mexican descent beauty didn’t know it! Strong, dark eyebrows (sometimes Marlene Dietrich style), top eyelids lined in black but not finished in cat-eye, and lips impeccably lined and painted in pure red, Selena was a Tejano rock star! Sometimes, the singer also wore a lilac wash or sandy brown version of a smoky eye (she wore the former when she accepted her Grammy Award in 1994) and a soft contour on the cheeks. She embodied the matte face makeup of the time too. And when it came to her nails, they were often polished a Gentlemen Prefer Blondes red varnish. Aye!

I know in writing, all of that didn’t necessarily read as “simple”, but the visuals of it were! What stood out the most were her big, awesome lips (and smile!) in red.

Epitomizing effortless sex appeal, the “Selena” look was cognate to old Hollywood glam. And was her iconic go-to before other pop stars, of the American music realm, like Gwen Stefani would also adopt red lipstick as their holy grail.

What also added to the legend of Selena were her clothing choices. She was a ’90s twenty-something her last years with us (before her untimely death in 1995). Her look was either James Dean cool in just jeans and a t-shirt, basics accented with leather or florals (it was all about daisies back then), big dangling or hoop earrings. And of course they were those glittery, cropped bustiers and bodysuits she delivered on stage when she was living for show business. The hairstyles were also a nod to her era, as she loved herself a half-up, half-dow ponytail ‘do. There were beautiful Tejanos before her, but Selena offered us fashion and makeup that were instantly recognizable as hers and inspiring to our own wardrobe. She was the new era of Tejano in the age of West Coast grunge, New York dance and hip-hop and it showed in her style!

Tumblr will provide you with plenty of proofs that Selena did it first. Beyoncé, Katy Perry and Lady Gaga have seemingly followed in her footsteps. 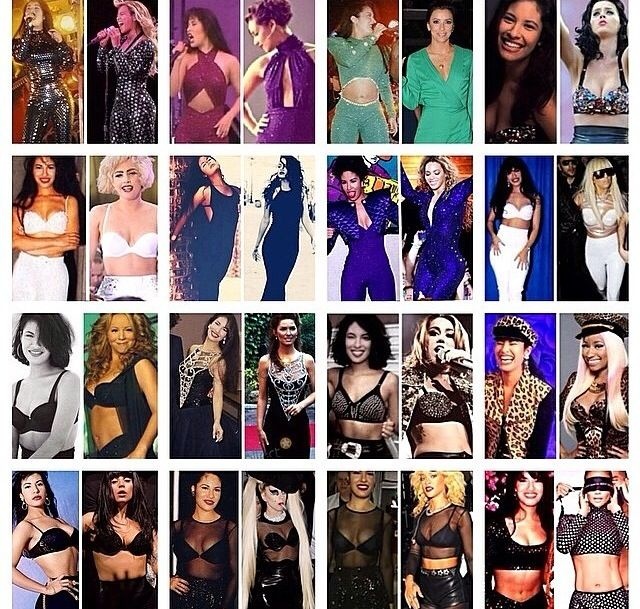 With the exhilarating announcement that MAC Cosmetics, after months of fans campaigning for her own capsule collection, on July 16, that in 2016, the long-awaited, limited edition, Selena makeup line would be available, “Salinas” got their wish! The response was immediate and excited as social media shared the straightforward first ad that read “M.A.C. + Selena: coming 2016 #MACSELENA.”

James Gager, the Senior Vice President of MAC released a statement, in honor of the late singer’s fans that’ve been going hard to get their idol a well-deserved set of lipsticks and highlighters.

“Selena’s talent and beauty, inside and out have left a colorful, meaningful impact in the world that has continued to grow over the last two decades. We have heard the passion and enthusiasm from her fans and wholeheartedly agree that her legacy embodies MAC’s philosophy. We are so excited to announce a Selena inspired MAC collection debuting in the latter part of 2016.”

Selena’s beloved sister Suzette Quintanilla also shared her enthusiasm and disclosed that it was a dream of her sibling to have a makeup line one day:

“I am so excited that MAC Cosmetics will be releasing a collection in honor of my sister Selena. Helping to create this collection brings me back to all those late night conversations on our tour bus when she spoke of having her own makeup line one day. If Selena were here she would be beyond ecstatic to have this happening. History is being made.”​

Rumor has it that one of Selena’s favorite red lipsticks was M.A.C.’s “Russian Red”! The upcoming set rom the brand will be fitting for a star so loved for her style as she was for her music. Prior to the news, YouTube has hosted lots of “Selena makeup tutorials” videos (and to my brown-skinned girls out there, you can do it too!) At last, we’ll have products with her namesake on it to continuing tributing the star as we aim to recreate that “Amor Prohibido” look!