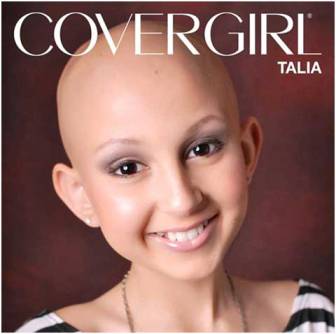 Incredibly bright, incredibly hopeful.  Talia Joy Castellano found her solace in makeup shortly after being diagnosed stage four of neuroblastoma, and later on preleukemia, at the age of 7.  She saw makeup “as a wig” of sorts during the beginning stages and by 2011 she had begun filming tutorials on YouTube.  She quickly gained a following that were charmed by her impressive skills, love for the field, and her undeniable happiness to the contrary of her serious condition.  Talia was especially fond of blending bright, vibrant colors into a smoky eye.  On her more than 150 clips, some have even achieved 1 million+ views.

Joy Castellano was the epitome of being the light through darkness, and her death was met with many mourners, including TV host Ellen DeGeneres who brought her on her show.  Talia gave DeGeneres a mememorable quote in that whenever she does feel down, she recalls Nemo in Finding Nemo to just “keep on swimming”.  She was also eulogized by fellow YouTube makeup sensation Michelle Phan.

She was highly self-taught on the ability of cosmetic application and her passion and serendipitous nature also touched the mega brand CoverGirl that chose her as honorary model with her own ad, which was announced after her appearance on Ellen.  Her death was announced on her official Facebook page by family members

Castellano, who was diagnosed with stage-four neuroblastoma when she was just 7 years old, started using makeup “as a wig” shortly after she found out she was sick. In July 2011, she began filming makeup tutorials in her bedroom — short, how-to videos for the glam, colorful looks she invented. Within months, she had hundreds of thousands of subscribers and millions of views on her more than 150 YouTube clips, on her channel taliajoy18.

An advocate for helping children’s cancer and the face of preserverance for her age group, her passing was a sad day and will her cheerful vibe will be missed.  See you on the other side, Talia.