Where Were The Women In Rihanna’s “American Oxygen” Video?

I just watched Rihanna‘s “American Oxygen” video and at first, I thought it was great. I went into it already liking the song. I viewed her March Madness performance of it. The lyrics spoke of the motif of anybody living in America trying to live past a dollar and dream. In the clip, spliced with Rihanna in front of a government building, an American flag and a spaceship setting, are iconic images from 20th and 21st century historical events and figures such as the Civil Rights Movement, 9/11, the influx of immigrants, World War II and the Vietnam War.

Yet by the time the closing homage for justice and equality appeared, I noticed a particular group were not featured as much as the male soldiers and blue-collar men. Where were the female heroes in the video? The heroines? I did not see any. In “American Oxygen” there are no feminists or images of powerful, influential, inspiring women and it is a extremely hurtful oversight. For a video that’s meant to tribute all that have worked for their dreams and the betterment of a more unified country, the images chosen were extremely heteronormative and patriarchal.

I saw clips of the Memphis Sanitation Workers Strike, or the more commonly known as the “I Am A Man” march from 1968, but no scenes of the Women’s Liberation marches from the early 1970s or the Women’s Suffrage walks before the 19th amendment was passed. I saw RFK, MLK and the Ku Klux Klan, but no Shirley Chisholm, Gloria Steinem, Fannie Lou Hamer, Rita Mae Brown, Rosa Parks, Coretta Scott King or Eleanor Roosevelt. Not even a picture of Harriet Tubman or Rosie the Riveter? Where were my heroines? Frankly, the only woman of status was found in the is the First Lady Michelle Obama and she’s right at the beginning.

The song, produced by Alex Da Kid, is so impactful (“Work for a nickel and a dime/Turn it into an empire”). And the addition of it being sung by a Barbadian native gives the song a more evocative element. The negligence of the women’s presence however clouds if any female viewer should even bother to celebrate the video. When patriarchy convinced men that women shouldn’t be allowed to vote, or viewed as the weaker sex, women like Sojourner Truth and Ida B. Wells fought so tomorrow’s children, such as myself, could officially vote and for the first time in 2008. Why weren’t they honored in “American Oxygen”?

Darren Craig, the director of “American Oxygen”, squarely focused on the socioeconomic issues of the American spectrum, but such issues have also plagued many a woman’s birthright and continue to do as history has proven.

Even when Craig responded with direct visuals to the lyrics, women were subsided for images when they could’ve been used so effectively. When Rihanna sings “Young girl, hustling. On the other side of the ocean” we see the singer briefly and then shots of a grainy ocean scene. However, when she sang “Young boy, hustling, trying to get the wheels in motion” shot after shot of young men are shown, obviously sensitive to what the lyrics are saying. Is there a reason why a clip of Ruby Bridges integrating William Frantz Elementary School couldn’t have been shown for the former lyric? What gives? 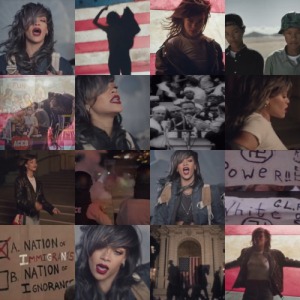 The near erasure of women as history makers and leaders in “American Oxygen” points to how society and the media are seemingly more sympathetic to the plights of men then they are for women. Outrage against sensationalized rape and violence towards women almost never seems to go beyond the feminist circle. (The closest thing to anything feminist-related in the video is that Rihanna’s nipples are pressed against her white tee. Maybe that was a far reaching act of support for the social media campaign of Free the Nipple). And we witness the many nationwide protests for gunned down Black men but for gunned Black women, they are lucky to be a blip on a socially Black conscious website.

And it’s not to say the video didn’t do some things right. The first historical clip shown is President Barack Obama being sworn in with The First Lady by his side. But women, just as much a part of the rise and building of America, were they omitted from such a forceful, dynamic message of patriotism. For all the criticism Patricia Arquette received for her Oscar speech (that through analysis could’ve been worded better) this past February:

“To every woman who gave birth, to every taxpayer and citizen of this nation, we have fought for everybody else’s equal rights. It’s our time to have wage equality once and for all and equal rights for women in the United States of America.”

Videos like “American Oxygen” show why female artists and activists must continue fighting the patriarchal, sexist machine that has betrayed women not more often than not but regularly. Scarily, if left up to others, or men for that matter, history written through their eyes will only have women mentioned in asterisk status or a minor paragraph or two of recognition.

It’s utterly fleeting that not one woman was shown that made a difference or broke barriers, but for seconds at time, there were images of only men waving the American flag in “American Oxygen.” There are plenty of news clips and photos of the Women’s Day marches that should’ve been included. Minus the song, the visuals for one of Rihanna’s best songs to be released looked less like the title it was supposed to represent and a lot more like “American Selectism.”

If the makers behind “American Oxygen” video needed some guidance on what great heroines to feature, they could’ve just turned to the WomenOn20s organization. Their mission is to get a woman on the $20 bill by 2020. All 15 of their proposals are beyond worthy of the honor. Read more about it here.

One thought on “Where Were The Women In Rihanna’s “American Oxygen” Video?”