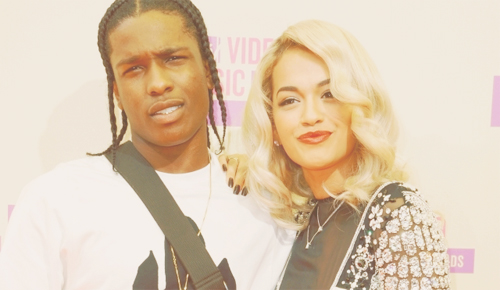 Since kissing and telling about an alleged tryst with Rita Ora, A$AP Rocky on his own accord chose to join the long list of men, in mainstream hip-hop, that found it justifiable to publicly embarrass a woman on wax.

The entertainment arena may classify Ora as a “famous for being famous” type. But her name is bold enough that when mentioned in anything even infinitesimally scandalous, pop culture busybodies listen. When Rocky recklessly rapped on the throwaway track “Better Things”: “I swear that b**ch Rita Ora got a big mouth/ Next time I see her might curse the bitch out/ Kicked the bitch out once ’cause she bitched out/ Spit my kids out, jizzed up all in her mouth and made the bitch bounce” (the word ‘bitch’ four times. Impressive), the blogs and social media were rampant to repost the lyrics. They also quickly latched it on to Ora’s reported bad luck streak with celebrity men and her dating life.

First of all, we didn't even know that Rita Ora and Asap Rocky were ever a thing to begin with. We might be reaching except for the fact that Asap spilled the TEA in his song "Better Things" off of his new album A.L.L.A. Unless there is another Rita Ora somewhere he is talking about your boo! Here's what he said: "I swear that b**** Rita Ora got a big mouth Next time I see her might curse the b**** out Kicked the b**** out once cause she b****d out Spit my kids out, jizzed up all– Read the rest at TheShadeRoom.com (link in bio) #ritaora #Asaprocky #alla

The childish lyrics felt extremely random. And the graphic details of the encounter were embarrassing to the ears.

In recent interviews with New York City radio shows Hot 97, Angie Martinez on Power105 and Sway In The Morning, Rocky was asked about the diss. To his credit, his newest sophomore album At. Long. Last. A$AP is a rap album heavily and confidently influenced by the psychedelic era. It’s a move distinct from most of his rap peers. But many pop culture interviewers have naturally been more curious about the gross Ora lyrics than the sonic flavorings of A.L.L.A.

On Sway In The Morning:

“I will say that I got into a lot of trouble over her. At times when I didn’t need to. She caused a lot of grief so at that time, for me, it was just, you know…I said what I said. And you saying I should’ve muted her name, maybe I should’ve.

It’s not like I’m just trying to pick on her. At the time when I made that song, I was really…I was dealing with that.”

“You gotta realize, I say what I want. And I was expressing a situation that had happened. You know, I feel bad that people keep talking about that. I didn’t think people would like that, to be honest.

I was in a relationship when I made that song, so I was referring to trouble that that girl had caused me. I’m being precise when I says she talks a lot.

Rita Ora, I’m quite sure she’s a good person. Me and her had our differences. This album is not about bashing that girl.”

With Angie Martinez on Power105:

“Speaking of petty, I was real petty on that Rita Ora record, Rita Ora line.

At the time, when I made it, it’s a really old song. But it’s dope though. At the time that I made it. The whole ordeal didn’t go out right. And I got in trouble. I was with someone.

And without justifying, the tasteful thing would’v been to mute that part and to keep the song. So i’mma live with that.”

“I hate to be the guy that has to talk about it all day. But it’s simple. It was an old song. I should’ve muted that part.

People are just joking on her. And I just think that the joke is already a ‘haha’ with the lyrics, just leave it alone. It’s no big deal because in all reality, she’s not the only pop star getting jizzed on. It’s…it’s life. It’s not a female or a male thing. It’s not a domination thing. By whole thing is, I don’t kiss and tell…this is so long ago.”

In attempting to justify his reasonings in a lighthearted tone to a serious one, he proclaimed that Ora behaving like Gossip Girl was detrimental to his then relationship with (presumably) Chanel Iman. But it still doesn’t pacify his tacky decision to keep the stanza diss in “Better Things.”

There’s really nothing he can say to get out of dog house when it comes to humiliating her because he knew what he was doing. It was a (lack of a) conscious decision to include those lyrics. Now possibly for every time we see or hear Rita Ora in the next year, many will remember what he said and think, “Oh yeah, she gave him head.” That’s not cool. (Unlike models from 1995, the incessant trolls online do not need to be feed).

Then Rocky claims it’s an old song. So why is it not water under the bridge? Rocky made a private matter into a public one. Your circle is not the general public’s circle! Nobody in or outside of the music industry even thought of you two being together, dating or a fling. That stand-out part in “Better Things” (for all the wrong reasons) was just rude, immature and misogynistic to the core.

So ASAP Rocky is shaming Rita Ora for having a sexual encounter with him, bet he would have shamed her if she did nothing too.

He wanted to be a good guy when chopping it up on radio, but he succeeding in joining the fuckboy moments club of male rappers. The Ora diss harkens to when Eminem used a sexual rumor about Christina Aguilera being with Carson Daly and Fred Durst, separately, in “The Real Slim Shady.” He infamously rapped in 2000:

Shit, Christina Aguilera better switch me chairs
So I can sit next to Carson Daly and Fred Durst
And hear ’em argue over who she gave head to first.
Little bitch put me on blast on M-T-V
“Yeah he’s cute but I think he’s married to Kim, he he”
I should download her audio on mp3
And show the whole world how you gave Eminem V.D.

Aguilera strongly defended herself and in a sassy retort stating that “Whatever I said, I’ll say again.” But considering both stars were huge in 2000, as were Durst and Daly, it was a mean joke at the expense of an extremely visible female pop star. Male rappers since the late ’80s especially (think the minor mainstream popularity of Too $hort) have disrespected famous and non-famous alike in their wordplay for too long. It’s a pathetic fact, and Rocky’s Ora diss reminded us of how loose male rappers still are. So quick to bed or get as many female “bodies” as possible, then clown a select few for sport or ire.

He can’t say that he didn’t want to hurt anybody and then do it anyway because in art, all great or decent work is likely personal. This particular choice that Rocky made was just whack. No one even knew about anything until those lyrics made the master cut. And because pop culture loves hypocrisy and double standards, days before the diss was revealed, the born and raised Harlem-nite mindlessly boasted to the New York Post about having three orgies with nine women at the recent SXSW festival. No think pieces about that yet however. I guess we’re still riding that “boys will be boys” bullshit.

Real talk, both Rocky and Ora were wrong based on his sorry not sorry mea culpas. But the world doesn’t need to know everything because this is how it goes now: A$AP Rocky looks like a jerk. Rita Ora was put on blast. And the ex-girlfriend is reminded of an incident she preferred never happened and now every current hip-hop fan knows about that particular traumatic moment too.