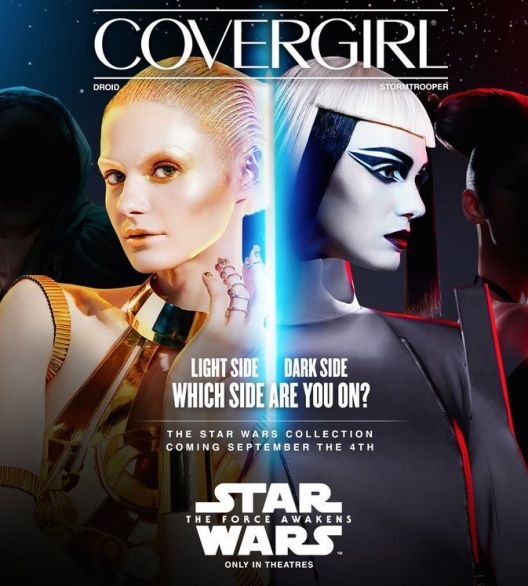 Ooooo! Yesterday, CoverGirl, in a collaboration with legendary cosmetics company Max Factor and Disney, announced that in September, they will be releasing a limited edition makeup set of Star Wars inspired makeup!

The collection is definite marketing for the upcoming Star Wars VII: The Force Awakens, the latest film in George Lucas’ cult franchise. The film will open in U.S. theaters December 18, 2015 (Lupita Nyong’o is casted in it!), but already the merchandising it will be hitting shelves in weeks!

Naturally, the colors are of the jewel-toned sphere, but their vibrancy are reflected in being topically frosted or mettalic, such as the Colorlicious lipsticks. In the photo above, the lipsticks (that come with The Force Awakens caps!) are listed in order as: “Dark Purple #50”, “Gold #40”, “Red #30”, “Lilac #20”, “Silver #10” and “Nude #70.”

The Star Wars mascara will remain Cover Girl’s newest tube, the Super Sizer by LashBlast formula and brush, but it is the packaging that will want you collecting these! Decked in chrome black, ten classic quotes are taken from the original Star Wars films from the 70s and 80s for its display. (Both regular and waterproof will be available). I already want “May the Force be with you.”

The collection is also presented in two parts as “Light” and “Dark”, which is also shown in the ad. The model on the left is adorned in a sweet apple golden version of a smokey eye and slicked back hair flecked with gold glimmer (veryC-3PO). Opposing her is herself in Siouxsie Sioux style makeup. Aggressive, artistic, graphic eyeliner and shadow, a vampy lip and a black-and-white, blunt banged wig. Basically: are you a Droid or a Stormtrooper? As the AV Club pointed out, the saga has had some underrated makeup moments of its own. While we all at one point had Princess Leia buns in our hair, what about Darth Maul’s hardcore black and red face paint from 1999’s The Phantom Menace?

And this set launching in September, is reportedly just the first of six looks. 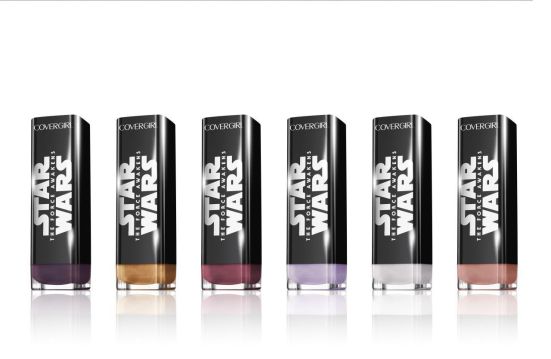